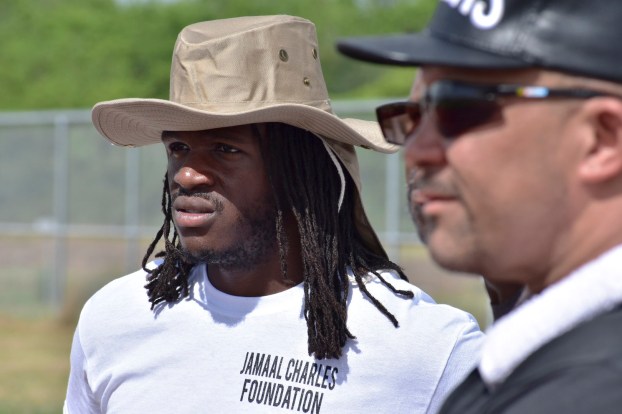 Jamaal Charles, along with some volunteers, keeps a watchful eye on drills during his camp in this June 16 photo. (I.C. Murrell/The News)

NFL: Charles signs with Jaguars, could be activated vs. Cowboys

Memorial graduate and 10-year NFL veteran running back Jamaal Charles is not hanging up his cleats.

Charles on Tuesday signed with the Jacksonville Jaguars to fill a void left by the injured Leonard Fournette. If he is activated, Charles will suit up for Jacksonville against the Dallas Cowboys in Arlington on Sunday (3:25 p.m. on CBS/KFDM-6).

“Opportunities like this, they don’t come all the time,” Charles said in an interview on the Jaguars’ website. “I’m here for a reason. I feel like, it’s God’s plan at the end of the day. He made me wait this long. Everything in my mind could have happened. I could have retired. I could have done other things, but God kept this option open for me.”

Charles, who will turn 32 on Dec. 27, was a free agent since completing a one-year deal with the Denver Broncos for the 2017 season and was most recently seen nationally during Saturday’s Red River Showdown game in Dallas between his alma mater, Texas, and Oklahoma. He played 14 games in Denver and finished with 296 yards on 69 carries and 129 yards on 23 receptions. His most recent 1,000-yard rushing season was with Kansas City in 2014, when he went 1,033 yards and nine touchdowns.

Charles remains the Port Arthur ISD’s all-time leading rusher and won a national championship as a freshman with Texas (2005). He spent his first nine pro seasons with the Chiefs, has 7,556 career rushing yards and is one of 104 players with 10,000-plus total yards from scrimmage (10,142).

He said the reason for coming to Jacksonville was to have a potential shot at reaching the Super Bowl. Charles has never played in an AFC championship game, but Jacksonville made the AFC final last January, losing to New England.

“I still kept my options open because I really want a championship,” Charles said. “I was excited to have this opportunity come open. Having a defensive like this and a running game and [Blake] Bortles at quarterback, I was just excited just [that Jacksonville was] allowing me to give me a chance. I’m happy things worked out.”

ALDS: Astros orbit into another ALCS with sweep of Indians