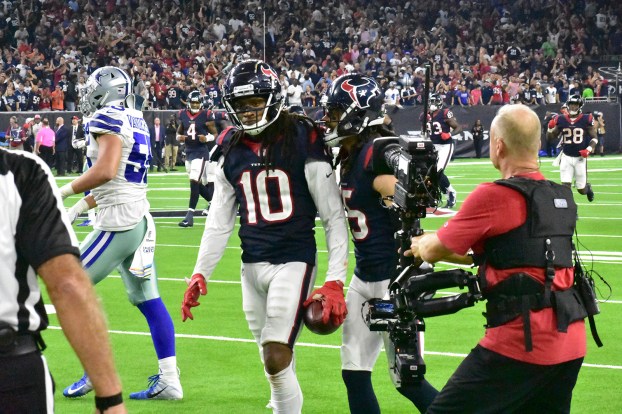 Houston receiver DeAndre Hopkins reacts after a 49-yard completion in overtime of a 19-16 win over Dallas on Sunday night. (I.C. Murrell/The News)

In the wake of Sabine Pass canceling the remainder of its football season due to the lack of players, the Houston Texans invited the team’s seniors and coaches to participate in a “special #Texans weekend,” which includes attending the home game against the Bills on Sunday.

In a video posted on the Texans’ Twitter account, the team’s All-Pro receiver DeAndre Hopkins invited the Sharks to enjoy the experience with the Texans.

With a cancelled football season ahead of you, @DeAndreHopkins would like to invite your team's seniors and coaches for a special #Texans weekend. You in? ? pic.twitter.com/Kl53dio6Jk

“Our superintendent (Kristi Heid), got it on her phone first and then told me,” Sharks head coach Jason Thibodeaux said. “Then, we ran over to tell the kids.”

Thibodeaux said they went and got kids out of lunch.

“We pulled them into the hallway to show them the video,” he said. “It was amazing. I know (Hopkins) is a busy guy, so for him to take time out of the day to do that is really special.”

Thibodeaux said he has not contacted the Texans to get any details, yet, but he is excited for players.

On Sept. 19, Sabine Pass decided to cancel the remaining six games on the schedule after two players were injured during a 50-0 loss to Hull-Daisetta. The Sharks started the season with 17 on the team. The injuries in the Hull-Daisetta game brought what was a 14-student roster down to 12.

The tweet was directed at the Sabine Pass ISD, which said it would be honored to accept the invitation.

By Kristie Rieken Associated Press HOUSTON — DeAndre Hopkins had 151 yards receiving, including a key reception in overtime, and... read more