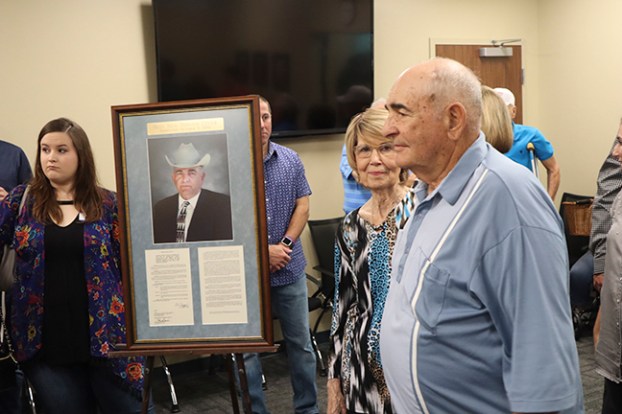 For 60 years of service: Dispatch center named for Billy Neal

NEDERLAND — Surrounded by family and friends, former Nederland Police Chief and current City Councilmember Billy Neal was honored Tuesday with a ceremony to name the dispatch center for his 60 years of dedicated service to this city.

Before posing for photos with family, Neal became emotional as he addressed the crowded room.

“Thank you, all,” he said. “This is one of the best things to ever happen to me.”

Family and dozens of Nederland city officials, residents and police staff who worked with and were befriended by Neal were present. That connection to others was why the former police chief joined the City Council a year after retiring from Nederland Police Department.

Neal served as Nederland chief for 41 years — he served 44 years with the department, in all — and has served as a City Council member for 16 years.

That sentiment wasn’t what Neal felt when he NPD hired him in 1957.

“I was actually looking for a job,” he said. “I came from St. Augustine down here. Me and my wife lived in Vidor. I was looking for work, and I had a friend here in Nederland say that they might have a job at the police department.

“I went to work here, but I wasn’t planning on staying but, maybe, until I could find another job. I never looked after I got here.”

Neal was a patrolman for three years before being named the youngest police chief in Texas at 24 years old.

“There was three of us when I came to work here,” he said. “It was the chief, the assistant chief and myself. That was all that was here. Just a little, old one-room building for a police station. There was no such thing as a dispatch center then.”

Being the youngest police chief in Texas had its challenges; some people doubted he was up to the job, Neal recalled.

“Some of the people was saying that I would never make it,” he said. “They thought I was too young. I told them we’ll see, but it was hard.”

Neal said he didn’t receive much flak from others within NPD.

“I just told them this was the way it’s going to be, and they took it and ran with it,” he said.

Neal said Nederland residents made his time in the city special.

“They are just so great,” he said. “They have been so good to me. We love the school district. My wife taught at the school,” he said. “It’s unbelievable how good this city has been to me. They accepted me when I was 24 years old. I was awfully young, but the citizens helped me.”

Neal said he just wants his service to be remembered for doing well.

In the wake of Sabine Pass High School canceling the remainder of its football season due to the lack of... read more