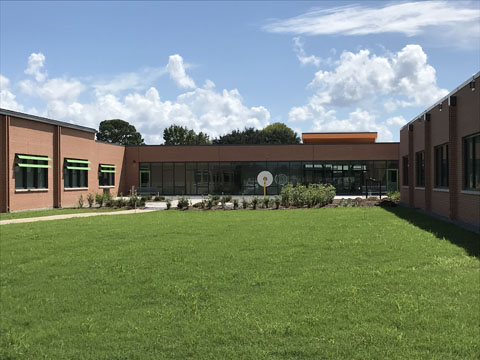 The newly built Sam Houston Elementary School will officially open its doors Monday to students and staff at its location on Fifth Avenue in Port Arthur. (Lorenzo Salinas/The News)

The new building of Sam Houston Elementary School will be set to open its doors Monday after nearly a three-year construction period.

Construction of a new facility was done for several reasons, including the need to move students from the portable buildings outside to a more central location inside.

Principal Marcia Sharp expressed great excitement over the newly built school facility and listed some of her favorite features.

“One of the best features of the building is the natural light,” Sharp said. “The architects did a terrific job ensuring hallways, classrooms, gym and the cafeteria enjoy plenty of natural light.”

She emphasized the importance of a safer building as well.

“The perimeter of the school is now fenced in,” Sharp said. “We will no longer have HUTS outside. This is huge in many ways.

“In terms of safety, we will all be inside the brick building and away from weather hazards. Students and staff will no longer be exposed to the weather during transitions. In terms of equity for all, all grade levels will be inside.”

Among other features, Sharp praised the gymnasium, music rooms and performance area.

“The performing stage is wonderful with exceptional lighting and wood flooring,” she said. “We have access to the stage from the band music rooms with an ADA ramp for students with disabilities.”

The new building can accommodate up to 760 students. Sam Houston currently enrolls nearly 700 students. Sharp said she expected enrollment to only go up — partly due to the new facility, but also due to the school’s academic achievement.

“The new building is beautiful and that will increase enrollment,” Sharp said. “In addition, our students performed exceptionally well on state testing last year.”

Houston students scored 84 on academic achievement — a B-letter grade — in three distinctions: Top 25 percent in the state in science, closing the gaps in academic performance of subgroups and college/career readiness.

The test was scored according to Texas Education Agency standards.

“Once the word gets out, Sam Houston will be the place to be,” Sharp said.

The road to Sam Houston’s new home has been a lengthy one — one that started with the passing of a bond in 2014.

“Planning with architects began in 2015; the groundbreaking took place in January of 2016; and here we are in October 2018, ready to move,” Sharp said. “One could go further back to the time when the community voted for the bond that secured the new building for Sam Houston.”

Sharp congratulated everyone who had a part in helping make the school come to life.

“I feel like it is a dream a long time in the making,” Sharp said. “I am glad I had an opportunity to be a part of the entire process along with the superintendent, the community, my colleagues and staff.

“Everyone is excited about the new building.”

Sharp asked that starting Monday, parents be patient with student drop offs and pickups, as full access to the new building would not be complete until the old building is brought down.

According to a press release from the district, students should be dropped off in front of the old building by 8 a.m. Sam Houston faculty and staff will walk students to the new building.

Parents are asked to pick up their children from the gym/cafeteria area of the new building, which could be reached by the access road on 36th Street.

In 2014, voters within the Port Arthur Independent School District passed a $195 million bond program for improvements in the district, including security enhancements, better infrastructure and transportation and more permanent classrooms.

Among repairs and renovations to over 11 campuses, the bond also paid for three new schools. Sam Houston Elementary was one of the three recipients for a new building.

Construction is still underway for Dick Dowling and William Travis Elementary Schools. Travis’ official opening is expected toward the end of the month.

By Ken Stickney ken.stickney@panews.com Tom Neal was hoping that Family Day at the Museum of the Gulf Coast, a popular... read more