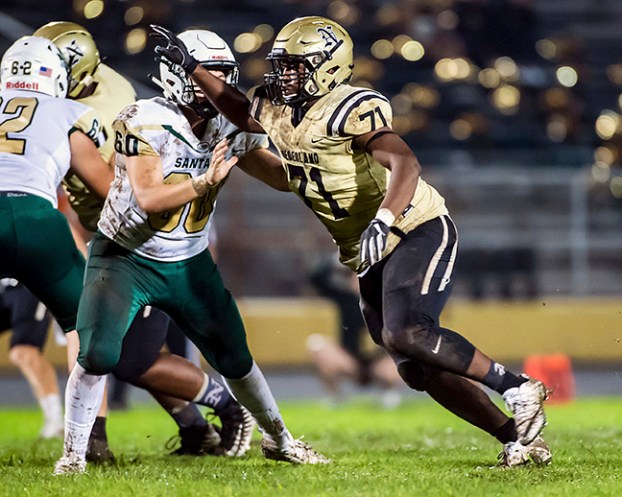 Da’Sean Somersall (71) is anchoring a defensive line that has helped Nederland start the season 4-0. (Brian Vincent/Special to The News)

BEAUMONT — The Nederland Bulldog’s identity is usually formed in the trenches on both sides of the ball. On offense, the Bulldogs like to impose their will through the running game and let it set up plays in the passing attack. On defense, the line creates chaos, stopping the opposing team’s rushing attack and putting pressure on the quarterback.

As Nederland (4-0, 1-0 in 12-5A-II) prepares to take on Barbers Hill (3-1, 1-0), the Bulldogs are focusing on starting faster on offense. Nederland gained 236 yards on the ground against Santa Fe, with the majority of the yards coming in the second half.

“We want to start faster opposed to having to get the run game going,” head coach Monte Barrow said. “When you’re geared to what we’re geared toward, you’re going to have slow starts sometimes, but they know we’re going to line up and not give up on what we are doing. We could help our line out a little more by being successful throwing the ball on first downs.”

Barrow said the offensive has been a staple for the team so far this season.

Along with the players, the credit goes to the offensive line coaches David Crommett and Jae Stoker for creating and maintaining a cohesive group.

“This is my 13th year here, and we’ve always had kids that love football,” Stoker said. “I’ve coached at other schools and there are other kids that want to be Longhorns, Aggies or Dallas Cowboys. A ton of our kids grow up wanting to be Nederland Bulldogs. That’s what’s special about this place. We have kids that bust their tail every day.”

The offensive line has paved the way for sophomore running backs Josh Mazyck and Kade Scott who are fourth and fifth in 12-5A-II in rushing, respectively.

If one believes iron sharpens iron, the Nederland defense is good practice for the Bulldog offense. The top-ranked defense allows an average of 230 yards per game. The Bulldogs have the best defense against the run and trail only the top-ranked Crosby pass defense by six yards.

The defensive line is coached by Jody Walker who said success starts with the mentality.

“The mentality is ‘No prisoners,’” Walker said. “We want to go out and set the tempo up front. We know that if it’s physical up front, it’s going to be a good game for us. It’s the way we practice. Bend, but don’t break. Coaching these kids, you’re going to get maximum effort every single play.”

“We go in to the game knowing we are going to dominate and we don’t take the pressure off of them,” Bodin said. “We let them know every single play that we are going to give them everything.”

“In high school, it’s hard to sustain long drives without something negative happening,” Barrow said. “As a defensive unit, we preach about not giving up the big play. If something happens and they break one, we have to make a tackle and line up for another play. So far, they have bought in to that.”

The game is slated for 7:30 at Eagle Stadium.

Memorial needed this match and was just two points away from tying Nederland one set apiece. That’s when Nederland took... read more