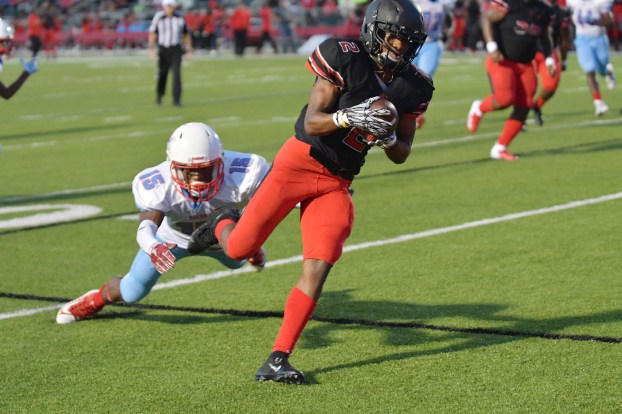 The Memorial offense, with Teajawon Mack (2) making a play against Houston Madison on Sept. 7, can organize drives at a very fast speed. (Jereem Augustine/Special to The News)

FOOTBALL: Life moves fast … and so does ‘Titan Tempo’ offense

How did coach Morgan, 35, put maybe his best week ever everything in perspective?

“Not much sleep,” he said Tuesday. “You go from a good victory and good win here at home, and we knew we were going in [Monday] for the baby … we were excited and ready to get that done, and now get a chance to prepare for Goose Creek on a short week, on a rainy week, so it’s moving fast. That’s for sure.”

#titantempo Let me introduce you to the newest Titan, Madison Joelle. Now that @jessbb37 took care of win #1 this week, we can focus on #2, Thursday night, 7:00 kickoff at Stallworth Stadium against GCM. Don’t miss it! pic.twitter.com/eiINwxhkJc

So is his “Titan Tempo” offense, a unit that often throws opponents offbeat.

Port Arthur Memorial’s 35-7 win over Galena Park (2-2, 0-1) might have taken more than 3 hours to complete, but the Titans’ offense needed less than a minute on each of its first three series to score.

Quarterback Kam Ladia and receiver Alex Ned covered 74 yards on a touchdown pass that took 11 seconds. The next series went 73 yards in five plays — but lasted only 52 seconds, not even five times the amount of time Ned’s touchdown took.

The last drive took five plays and 57 yards — in 53 seconds. Each of the drives included at least one big play, as Branden Chaney (31-yard run) and Chan Rubin (44-yard reception) went for touchdowns.

“Well, hey, that’s what we expect,” Ladia said. “We didn’t plan on that. We just move fast, execute on that and score touchdowns.”

To Morgan, “Titan Tempo” is more about knowledge of the offensive scheme than it is the speed of the offense itself.

“It’s not as fast for our guys,” Morgan said. “It was fast in the spring. But they understand what to do. There’s a lot of terminology, and they picked it all up.

Said Ned: “All we’ve got to do is get our mental reps down, and we’ll be OK.”

While “Titan Tempo” is Morgan’s brainchild, the rest of his coaching staff played roles in planning the offense, which nets 275.3 yards per game.

“Everybody has had a hand in it,” offensive coordinator Zach Bass said, “from the kids to the coaches to the community. It’s more of a mindset than it is necessarily moving-on-the-field fast, but it’s an effort to move fast in the weight room, move fast around the school building and move fast on the field. It’s the brainchild of coach Morgan, but he’s put it on the shoulders of all the coaches and athletes and community members and stakeholders in the program to support that idea.”

Imagine the offensive speed that defenders like junior strong safety Colton Mitchell have to face in team drills on a daily basis.

“It’s tough,” said Mitchell, who intercepted Galena Park twice (including a 48-yard pick-six return) and recovered a Yellowjackets fumble. “Our receivers are great. They’re great route-runners, the quarterback can really throw the ball down the field. It’s really good competition at practice.”

Morgan had to move fast after Madison was born at 12:39 p.m. Monday to make it to practice on a short week. Adding a second child — Madison has a 3-year-old brother, Mason — means life will be much faster in the Morgans’ household, the coach said.

“[Mason] was fired up for Madison to get here,” Brian Morgan said. “It’s something that we’ve known was going to be in the middle of football season.”

Let alone his first season as the Titans’ head coach.

FOOTBALL: Colonels hang up 613 yards, pull away from Cardinals for 50-27 win

THIBODAUX, La. — Lamar has fallen behind first in four of five games this season. The Cardinals came back, however,... read more