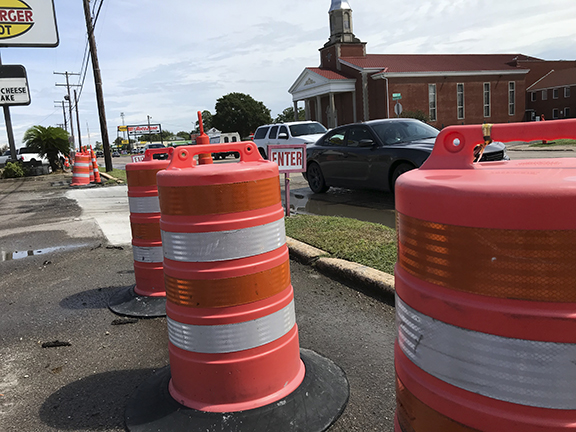 Barricades from projects on Nederland Avenue sit alongside the road in Nederland on Wednesday. (Ken Stickney/The News)

NEDERLAND — City Manager Chris Duque said he hopes the Nederland Avenue street project will be wrapped up for the post-Thanksgiving shopping rush.

“The contractor has committed to us that if it’s necessary for them to work on weekends to catch up on work during the week, they will,” Duque said. “We’re hoping we can get this all done.”

Duque said when the city awarded the bid, they made clear to the contractor that the schedule was important.

“During pre-construction, after we awarded the bid, we went over all of that again,” Duque said. “We told them, ‘These are the dates. You have to make them.’ We’ve hammered that point home several days. They’ve been trying to do that.”

The project began in May and was originally scheduled for completion at the end of October.

In August, the project’s end date was pushed back to the beginning of November. During a city council meeting, Public Works Director Robert Woods said the road would be mostly completed by the week of Thanksgiving.

“Right now, we are about a month out of the original completion date,” Duque said. “Now, we are hoping the weather will cooperate. We really need the weather to help us out to get through this project.”

The construction hasn’t stopped businesses from opening on Nederland Avenue. In mid July, Wienerschnitzel opened up and experienced long lines for many weeks around lunchtime.

Last week, Whataburger opened its doors to the public on the same end of Nederland Avenue, near Highway 69, and has had long lines and a full parking lot around breakfast and lunchtime.

Those driving down Nederland Avenue will see construction workers have begun adding the patio on what will be Judice’s Cajun Café. The eatery will be located near Whataburger in the old Sartin’s location.

The owner of Judice’s, Al Judice IV, said the construction of the location has fallen behind schedule, but he hopes to have the restaurant opened by the end of the year.

“Once we get the patio finished, it should move quickly,” he said.

Judice said weather and contractor schedules have pushed opening day back, but he is still excited about operating at the Nederland location.