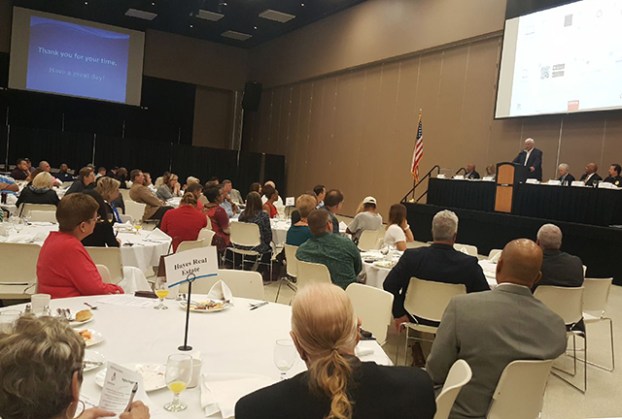 Getting up and running: PAPD moving forward with new leadership

(NOTE: This version of the article shows the correct number of officers in patrol as opposed to the earlier version which included a typographical error.)

Port Arthur Police have a lot going on and more in the works.

One issue was staffing and how the division is made up. Currently 81 of the 114 officers are in patrol, four are in training and another four are at the regional police academy.

“As we are getting those numbers up we are also filling in some of the specialized units,” Fratus said after the event. “Two are going to narcotics and we are working to get the traffic unit back up and running.”

Fratus wants the public to know that although the staffing may have been down a bit there was never a time when the patrol division wasn’t fully staffed.

In addition, PAPD is looking to get officers back out in the community and meeting with business owners.

“It’s a norm for our officers to check on businesses and it may be at night,” he said.

With that said it may be time for some business owners to contact police to update their keyholder and contact information so police know who to contact if needed. Business owners can contact Lexi Smith, PAPD field operations division secretary at lexi.smith@portarthurtx.gov

Fratus also gave an update on Crime Stoppers of Southeast Texas and how to become a partner.

“Crime Stoppers is not tax funded. It is funded by private donations and fundraising,” he said. Those wishing to become a partner can call 833-TIPS or go to www.833tips.com

PAPD is actively recruiting officers and the city is set to administer the entry level civil service examination for the position of police officer at 9 a.m. Oct. 20 at the Carl Parker Multipurpose Center, 1800 Lakeshore Drive.

The department is also under new command with the addition of the new chief, Tim Duriso.

Duriso spoke briefly before passing the mic to Fratus.

“I’ve been on the job three weeks already and it’s been a ride,” Duriso said with a smile.

The veteran law officer gave a verbal nod to retired officers Jon Carona and Rodney Balsamo, both of whom Duriso worked with decades ago.

“I left Port Arthur Police Department in 1998 to join the Drug Enforcement Administration, then 20 years later the chief’s position opens,” Duriso said. “There’s something in my heart for Port Arthur. I realize in my three weeks there are excellent police officers in Port Arthur.”

In addition to updates by the PAPD there was also information presented by the city of Port Arthur, Port Arthur Independent School District, Lamar State College Port Arthur, Sabine Neches Navigation District, Jefferson County, Drainage District No. 7 and the Port of Port Arthur.

Is two better than one?: City Council undecided on 2nd ambulance permit

The Port Arthur City Council has delayed a decision to permit a Houston ambulance company to operate in this city,... read more