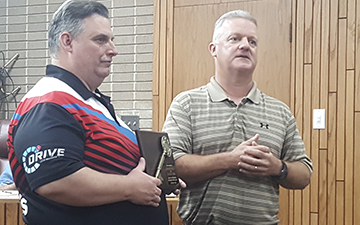 Groves’ ‘Dominos man’ gets key to the city

Geisel has been manager of the Groves Dominos location for 10 years and is well known for his generosity in times of need. Mayor Brad Bailey presented him with the key to the city this week.

“It’s one thing to call somebody and ask for something but for them to call and ask how they can help?” Bailey said while standing next to Geisel.

During Tropical Storm Harvey’s devastating flood a number of people were evacuated to the city’s activity building. There was no immediate thought of how to feed these people, only of their rescue, which Bailey helped with.

So Geisel stepped up and fed the masses.

“George has always been there for whatever problems we may have had,” Groves City Manager D. Sosa said. “He has taken care of first responders, taken care of city employees, has been a great corporate citizen for Groves.”

Geisel has even brought pizza to people who were affected by a house fire, he added.

Bailey, Sosa said, will be recognizing others who helped during Harvey and other occasions through the rest of the year.

A woman remains hospitalized after her car became airborne and struck a tree late Saturday night. Police believe she was... read more