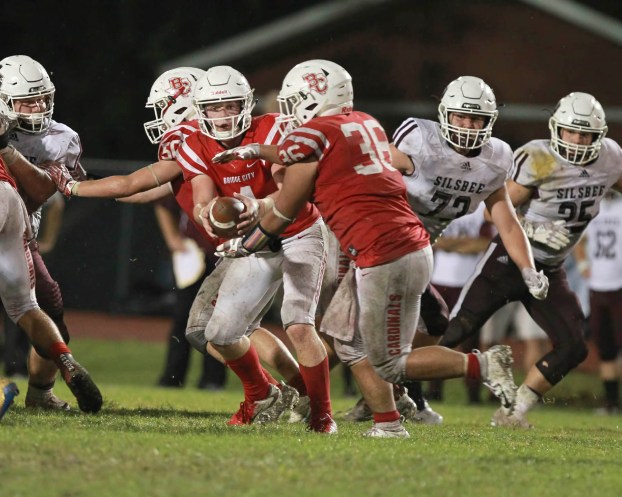 FOOTBALL: Big plays carry Silsbee past BC for first win 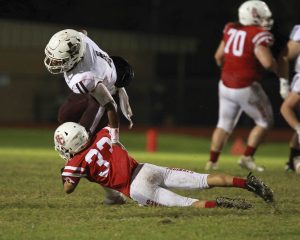 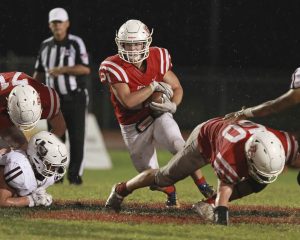 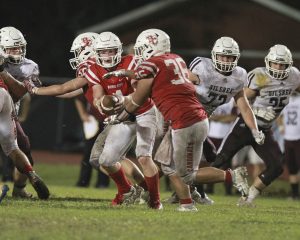 BRIDGE CITY – Utilizing big plays in the first half, the Silsbee Tigers zipped past the Bridge City Cardinals 48-14 in non-district action at Ward Stadium Friday night.

Tiger back Antonius Arline had six carries for 131 yards and two TDs in the first half while fellow back Chris Martin zipped for 86 yards and two scores on just four carries. Tiger quarterback Dralyn Taylor had 48 yards on five totes.

The Tigers finished with 479 total yards for the night, 438 on the ground on 36 carries. Arline finished with 148 yards on nine carries. Taylor had 104 yards on 10 totes and Martin had 97 yards on five carries.

The Cardinals struck quickly the first time they had the ball after the Big Red defense held the Tigers on a fourth-and-6 play from the Silsbee 35.

Cardinal fullback Andy Lara broke up the middle for a 31-yard jaunt to the Tiger four and he bolted into the end zone from six yards out for the score. Oscar Carranza booted the extra-point as the Cardinals led 7-0 with 10:15 in the first quarter.

The Tigers, however, countered nicely on their next series behind the legs of Arline.

After a nice kick return, the Tigers started at the Cardinal 47 and scored four plays later. Arline broke off a 30-yard run to the Cardinal 3 and scored on the next play. Arline, who had four carries and all 47 yards on the drive, ran in the two-point conversion to put the Tigers up 8-7 with nine minutes in the first quarter.

After stopping the Cardinals on fourth-and-1 from the BC 48, Martin got loose on the very next play, scooting down the right sideline for a 48-yard touchdown gallop. The Tigers missed the extra point to lead 14-7 with 6:52 in the first quarter.

The Cardinals ate up nearly six minutes off the clock on a 10-play drive but it stalled and the Tigers got it at their own 22. Arline then roughed up the Cardinal defense by going on a 78-yard touchdown jaunt up the middle to push the Silsbee lead to 20-7 with 0:02 in the first.

Return man Cameron White caught the BC punt coverage team napping when he broke loose for a 63-yard punt return down the right sideline for a score and quarterback Dralyn Taylor scored on the two-point conversion run to push the lead to 28-7 with 7:58 in the half.

The Tigers put together a six-play, 55-yard touchdown drive late in the half, Taylor, on third-and-12, broke loose for a 31-yard keeper to the Cardinal 27, and two plays later, Martin tore around the right side for a 22-yard touchdown run as the Tigers grabbed a 35-7 edge with 2:12 left in the half.

After defensive back Darshon Turk picked off BC quarterback Cace Skinner’s pass at the Tiger 42 and returned it to the Cardinal 24 on the first play of the third quarter, Taylor answered quickly with a 24-yard keeper for a Tiger score, pushing it to 41-7 with 11:32 in the third.

Silsbee backup tailback Dylan Colvin capped off a seven-play, 65-yard scoring drive with a 22-yard touchdown dart with 10:37 remaining to make it 48-7.

The Cardinals put together a nice11-play, 66-yard scoring drive late in the fourth.

Villanueava had a big 27-yard gallop that got to the Tiger 24. Six plays later Skinner found Jackson Tims for a nine-yard touchdown pass in the right corner of the end zone to cut it to 48-14 with 4:25 left.

The Cardinals will take a short trip down the road next week to take on the West Orange-Stark Mustangs to wrap up their non-district slate.

HAMSHIRE — In front of their home fans for the first time this season, the Hamshire-Fannett Longhorns trampled the Huntington... read more