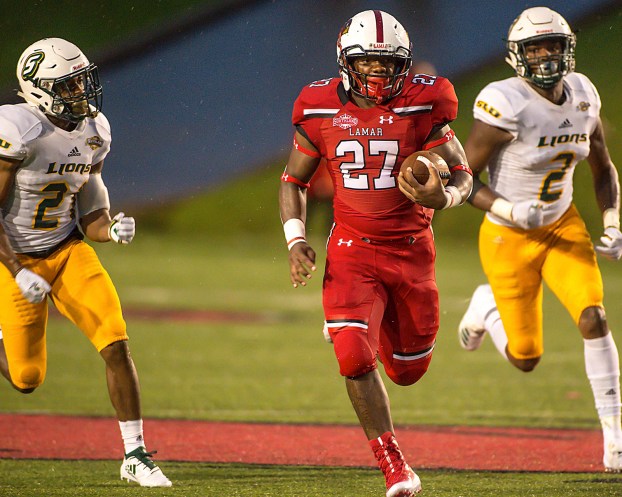 Lamar fullback A.J. Walker dashes 48 yards for a first down against Southeastern Louisiana on Saturday in Beaumont. (Brian Vincent/Special to The News) 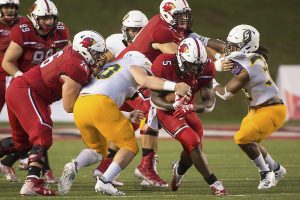 Lamar running back Derrion Randle (5) finds an opening in the Southeastern Louisiana defense Saturday night in Beaumont. (Brian Vincent/Special to The News) 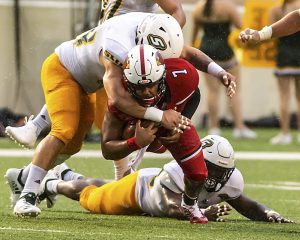 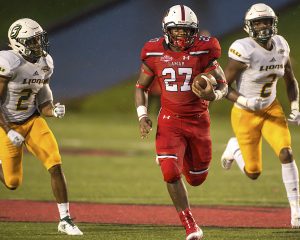 Lamar fullback A.J. Walker dashes 48 yards for a first down against Southeastern Louisiana on Saturday in Beaumont. (Brian Vincent/Special to The News)

Untimely penalties allowed Southeastern Louisiana to turn back Lamar late and take a 30-24 victory Saturday night, handing the Cards their third straight defeat. Lamar, however, had won the turnover battle with five takeaways (a Davon Jernigan interception return for a touchdown and four recoveries out of seven Southeastern fumbles) to the Lions’ three.

Thanks in large part to winning the turnover battle, the Cardinals (1-3, 0-2 Southland) held their first lead in three weeks, going up 14-7 and leading 17-10 at halftime.

Lamar forced five turnovers, four of them fumbles, while Southeastern (1-3, 1-1) pounced on one fumble and picked off a pass. Yet, it was Colbert’s second intercepted pass, an underthrown toss Tre’ Spann returned 24 yards to the Lamar 28, that led to the Lions building a 27-17 lead, the largest of the game, with with 10:48 left.

Juwan Petit-Frere, who caught seven passes for 83 yards, converted third-and-10 on that capitalizing drive with an 18-yard play on a drag route. Bransen Schwebel hauled in a 9-yard scoring pass from Virgil.

Colbert completed 15 of 27 passes for 171 yards and a touchdown. He went 5 of 8 (completing the first four attempts) after Schwebel’s touchdown, and converted a fourth-and-1 with a 22-yard connection to tight end Case Robinson. A pass interference call pushed the drive to the Southeastern 25, and Lamar cashed in on a 22-yard DeWan Thompson catch with 5:44 left.

Reigning Southland Newcomer of the Year Lorenzo Nunez, who transferred last season from South Carolina, nearly helped Southeastern seal the game with five carries for 24 yards on the following drive. He fumbled on back-to-back plays, but it took a video review to reverse a fumble call on a short keeper to the Cards’ 2 that was recovered in the end zone, and the Lions came away with a 23-yard field goal.

Southeastern then caught Lamar off guard with a successful onside kick to deny the Cardinals a final possession and run out the clock.

Jernigan leapt up to intercept a pass just 2 yards away from Virgil and took it back 53 yards to put the Cardinals on the board after they trailed 7-0.

Cornerback Tyler Rios recovered two fumbles for the Cardinals, stripping the ball away to force one of them. Defensive end Brandon Arnold forced the other and Jernigan recovered it in the final minute before halftime.

Southeastern’s Ferlando Jordan picked off Colbert and returned it 3 yards with more than 9 minutes to go in the second quarter.

Still missing Myles Wanza to an injury from the Texas Tech game in Week 2, the Cardinals rushed for 180 yards against the Lions. Fullback A.J. Walker led the way with 88 yards on nine rushes, Colbert followed up rushing 21 times for 67 yards and a touchdown, and Randle turned in 10 carries for 20 yards.

Walker rushed for 48 and 11 yards on back-to-back carries in a second-period drive Colbert finished off with a 2-yard run. Colbert then completed a two-point conversion to tight end Case Robinson.

Lamar needed only to fight back from a 7-0 deficit, not the 28-point hole it erased against Northwestern State last Saturday before losing 49-48. Petit-Frere ran 22 yards to the Lamar 33 on Southeastern’s first offensive play, the Lions recovered a fumble at the 6 on the end of the next play, and Devonte Williams took it from there to complete a three-play, 45-yard drive that opened the scoring.

Following Colbert’s TD run and conversion pass, Petit-Frere took back the kickoff 81 yards to the Lamar 16. Holding and unsportsmanlike penalties against Southeastern lineman Alfred Beverly III, a West Brook graduate, hampered the possession, and the Lions settled for a 36-yard Jonathan Tatum field goal to pull within 14-10.

Elvin Martinez connected on a 32-yard field goal attempt later in the quarter to fashion the halftime score at 17-10.

A week after he had an extra-point attempt blocked that otherwise would have tied the Northwestern State game at 49-49, a snap was mishandled after Jernigan’s pick-six. Martinez picked up the ball and rolled right for a pass, but it was intercepted.

The Cardinals committed two roughing-the-passer penalties on the same drive going into the fourth quarter. Virgil (27 of 44 for 285 yards, two touchdowns) threw incomplete on fourth-and-3 when linebacker David Crosley was called for roughing near the Southeastern sideline. That extended the drive, and two plays later, tackle Darien Wilson drew a flag as wideout C.J. Turner dropped a sure touchdown going to his knees.

Tatum, however, got Southeastern the lead at 20-17 with a 22-yard field goal.

Rios for his two fumble recoveries, one of them coming after he stripped Petit-Frere at the end of a 6-yard completion.

HAMSHIRE — In front of their home fans for the first time this season, the Hamshire-Fannett Longhorns trampled the Huntington... read more