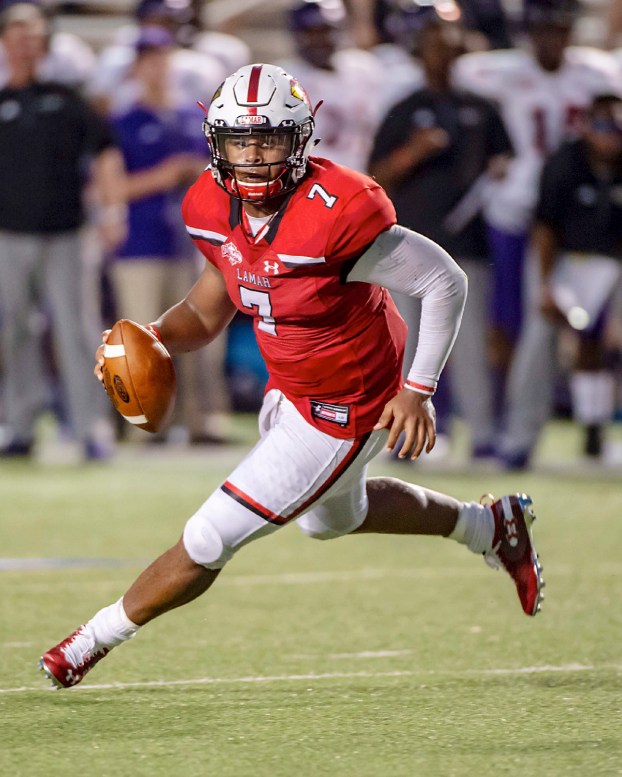 Darrel Colbert Jr. of Lamar threw for 263 yards and four touchdowns and ran for 137 yards and three more TDs last Saturday against Northwestern State. (Brian Vincent/Special to The News)

FOOTBALL: Cards or Lions: Who’ll get out of Southland cellar?

BEAUMONT — The next time Lamar pulls within one point on a touchdown with 2 minutes or less remaining, don’t expect coach Mike Schultz to be as conservative as he was when Northwestern State blocked Elvin Martinez’s last extra-point attempt.

But Lamar’s most recent touchdown came with 2:38 left on the clock, maybe enough time with a defensive stop to get the ball back.

“I’m not a big overtime guy,” Schultz said. “Unless we’re moving the ball really well and the other team’s not, I’m a little more aggressive when it comes to those things. I think you’ve got just as good a chance on a two-point conversion as you do in overtime.”
Overtime didn’t come, and neither did that defensive stop. Lamar (1-2, 0-1 Southland) fell two points shy of being 1-0 in the Southland Conference. For homecoming Saturday night, the Cardinals will try to keep Southeastern Louisiana (0-3, 0-1) winless.

The Lions, however, have played a little more challenging schedule to date. While Lamar — which opened the season routing an NAIA ballclub 70-7 — recovered from a 77-0 loss to Texas Tech and 28-0 early hole against Northwestern State enough to pull within a 49-48 final decision, Southeastern lost by a field goal to Louisiana-Monroe and was shut out 31-0 by LSU before losing its home opener to defending Southland champion Central Arkansas.

If the Cardinals can draw anything from their late wave of momentum from last Saturday — like senior quarterback Darrel Colbert’s four passing and three rushing touchdowns — Schultz will take it.

“Darrel is doing what we would like a senior ace quarterback to do,” Schultz said. “… Last year, Darrel was not too far off from being a freshman quarterback. He took some reps at SMU. He didn’t take a lot of reps at SMU, so he came in a situation where he went through six games last year. That was the first time Darrel was a full-time starter at this level. What I think you’re seeing in him is some maturity in him.”

The Lions, based in Hammond, Louisiana, have had their way with the Cardinals in recent years. Southeastern has won five of the last six meetings (and six of 10 overall), with Lamar last winning 38-14 in 2016.

Frank Scelfo is still looking for his first win as the Lions’ head coach. He took over after Ron Roberts left to become defensive coordinator at Louisiana.

Lamar is coming off taking on the top passing offense in the Southland to line up against the second-best passing offense. Southeastern’s 312.7 passing yards per game is second best to Northwestern State’s 354.3.

Junior Chason Virgil of Mesquite is responsible for 310.3 of Southeastern’s passing yards per game. His average leads all Southland quarterbacks.

Reigning Southland newcomer of the year Lorenzo Nunez takes snaps as well but is also a utility player.

Neither the Lions nor Cardinals have a player among the top 10 rushers in the Southland. The first order of business for Lamar, however, won’t be to slow the pass game down.

“I think the first thing we ought to do is stop the run,” Schultz said. “… We basically stopped the run the other day. We wanted to make them one-dimensional.”

That may be easy for the Cardinals. Their rushing defense (134.7 yards allowed per game) ranks second only to McNeese State (96.7) in the conference.

A Corona Gameday Beer Trailer will open at 9 a.m. in lot A-5 of Provost Umphrey Stadium, where the Cardinal Fan Zone will open at 2:30 p.m. Jerry Diaz will perform at the Corona Gameday Tailgate Stage, under the Montagne Center marquee, starting at 3:30 p.m.

The Re/Max Skydiving Team will perform before the game.