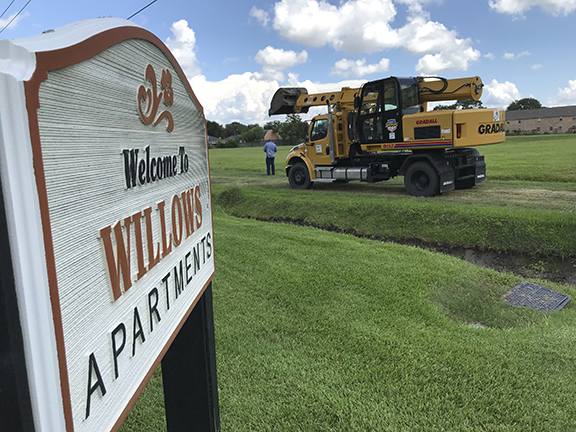 The city of Port Arthur has initiated work to address drainage and flooding in the Willowood Lane and Rice Farm Road area off Jimmy Johnson Boulevard, but a nearby church that’s faced flooding before says they want to see more.

Assistant City Manager Ron Burton and Alberto Elefaño, city engineer, said this week that the city has closed off Willowood Lane to reset a section of stormwater drainage pipe under the street. The city intends to replace 24-inch pipes in the area with 30-inch pipes to improve water flow and move water more quickly to DD7 drainage.

“We are improving drainage and upgrading culverts,” Burton said. “We are addressing drainage issues they have had in the past.”

But the Rev. Rick Erwin, pastor at nearby Procter Baptist Church, said he’s visited City Hall several times this year and is unimpressed by the city’s response to him and his flock.

He said as recently as Labor Day, heavy rains sent water as close as the front door of the church, stopping inches short of flooding the building again.

“We were breathing deep,” he said. “It came that close to coming into the building.”

Erwin and his congregation opposed a proposed project to build townhomes on almost five acres of property nearby on Willowood. He said plans called for building the townhomes on elevated property, which he said would cause runoff near the church and into adjacent neighborhoods, where many people in his congregation live.

Erwin said nearby residents are settled in their neighborhoods and have invested heavily in Port Arthur.

“I’ve been pastor of this congregation for 30 years. What they have in their life is invested in their home and property,” Erwin said. “I speak for them. I feel like their shepherd. I want to take care of them.”

While Erwin and the church opposed developing townhomes nearby before the City Council in May, the City Council, in turn, said Port Arthur needs to develop single-family residential areas.

Burton and Elefaño said the improvements to the area would be done in-house, but would be valued around $75,000 had they contracted the work out.

The engineer said the improvements would make sure the townhomes would not adversely affect neighboring homes, apartments and the church.

“We think the residents will be delighted,” Burton said.

“The city does not take this business seriously,” he said.