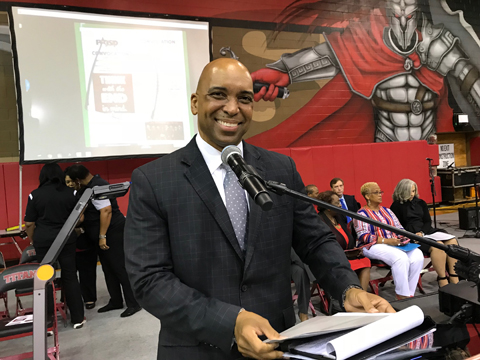 By all accounts, Port Arthur schools are moving in a positive direction. Just ask the superintendent.

Topics ranged from its recently passed school budget for the 2018-2019 school year to the public debate over renaming two of its elementary schools that were named after Confederate soldiers.

PAISD routinely operates with a budget over $100 million per school year, which is the total that includes funds like state and local.

The board of trustees voted to pass the 2018-2019 school budget at its regular board meeting last month.

With an estimated total of 1,300 permanent employees working for the district, Porterie highlighted some of the ways the district took care of its workers — namely that of improved salaries, full benefits and Social Security.

“We want to make sure the compensation package is one where they can take care of their families,” Porterie said. “Last year, we were able to give a large raise (and) this year we gave a raise as well.”

PAISD can boast it has the highest starting salary for teachers in the area — $48,500.

“We’re proud of that,” Porterie said. “And in our compensation package, we pay total insurance for employees only.

The district is also one of few school districts that pay into Social Security.

“And of course we were able to bring to our board of trustees a balanced budget, and that is something we strive to do every year.”

After paying off lingering deficits, Porterie said the district is in a better financial place than in recent times — so much so that it is now looking forward to adding money to its fund balance.

“We understand that Port Arthur Independent School District is not just education, not just teaching children; it is a multimillion dollar business,” he said.

The district currently employees about 1,300 regular employees and 100 to 200 contract employees.

It’s only a name

Since the beginning September, PAISD has been accepting name suggestions for Dick Dowling and Robert E. Lee Elementary schools, as submitted to it by the Port Arthur community.

The possibility of renaming the two schools has been raised in the past, but didn’t go much further than talk. With new signage being made for Dowling, the district wishes to be certain that whatever name adorns its newly redone school, the name should remain there for a while.

“The intent is not to cause a ruckus. The question of (renaming) came up because we are building a new Dick Dowling Elementary,” Porterie said. “There’s signage we have to purchase.”

Porterie said the board did not wish to purchase signage for one name, but then have to go back and change it if the board decided to change the name at a later date.

“We’ve had one person come several times who voiced his opinion, but that has not been the community outcry. I think the board wants to hear from the community.”

Moving forward regardless of name

“There are a lot of opinions when it comes to changing names,” Portreie said. “Port Arthur Independent School District board and staff recognize and respect people’s opinions.”

The controversy around the Dowling and Lee school names stems from the fact that both were named after Confederate soldiers during the Civil War. Some opinions have been voiced that the names represent a dark period in the country’s history where slavery was not only allowed but encouraged.

Porterie said the schools do not represent or celebrate that period in America’s history.

“We understand — all of us understand and realize — that slavery was not a good thing. But a time comes that you have to teach what happened for students to understand what they have to do as they move to the future.

Accordingly, Porterie said minorities have more opportunities than they ever did before.

“In a way, this enhances education,” he said. “Because this happened 200 to 300 years ago. Look at where we’ve come since that time and what we had to do to get there.

“Education is the key to freedom in all sense of the word.”

He stressed the opportunities that receiving an education could provide.

“And the world we live in is a very diverse world, not just a community but the world… You learn from those things and move forward.”

A look at the claims made in four lawsuits against Arthur Square LLC and Capstone Real Estate Services Inc. shed... read more