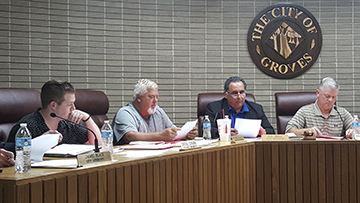 GROVES — Groves Police have a brand new contract and a new way of dealing with arbitration issues.

Councilmembers on Monday approved the collective bargaining agreement between the city of Groves and the Groves Police Association effective from 2018 to 2021.

The contract allows for two types of arbitration; standard and expedited, Groves City Manager D. Sosa said prior to the meeting. Standard arbitration comes into play when an officer is terminated or suspended for more than 28 calendar days, whereas expedited arbitration is much simpler — an arbitrator is selected, the city makes its case, no attorney, no rules of evidence and the officer can have his or her union representative present. After arbitration the arbitrator has 48 hours to make a decision.

In addition, the police union has allowed the city marshal, under this new contract, the right to discipline officers with up to 36 hours suspensions at a loss of pay with no arbitration.

Sosa said that an extra step was also added before arbitration is sought, which involves “a sit down with the city marshal, city manager, the officer and his representative and see if we can work it out and come to some sort of agreement before we go to arbitration at all,” he said. “So, another step was allowed for a meeting of the minds and see if something can be done before arbitration.”

The cost for Rabalais’ representation is paid for by the association while the city will foot the bill for Lynn to the tune of $75,000 to $85,000. A final decision has not been made as of Monday.

But arbitration doesn’t happen very often. Sosa said this was the first time there had been an arbitration hearing since he became employed with the city.

“I think the officers and other leadership were more than cooperative and negotiated in good faith and I think they (police union) realize the waste and futility in arbitration we went through,” he said. “The TMPA (Texas Municipal Police Association) was not at the bargaining table. This was the police officers representing the union and the city of Groves. It (negotiations) was strictly done in house. I was very impressed with the attitude and approach the officers took and thought it was very professional and with the understanding that we are on the same page — that there are better ways to give officers a way to appeal and go to an arbitrator without spending tens of thousands of dollars.”

By Lorenzo Salinas l.v.salinas@panews.com   By all accounts, Port Arthur schools are moving in a positive direction. Just ask the... read more