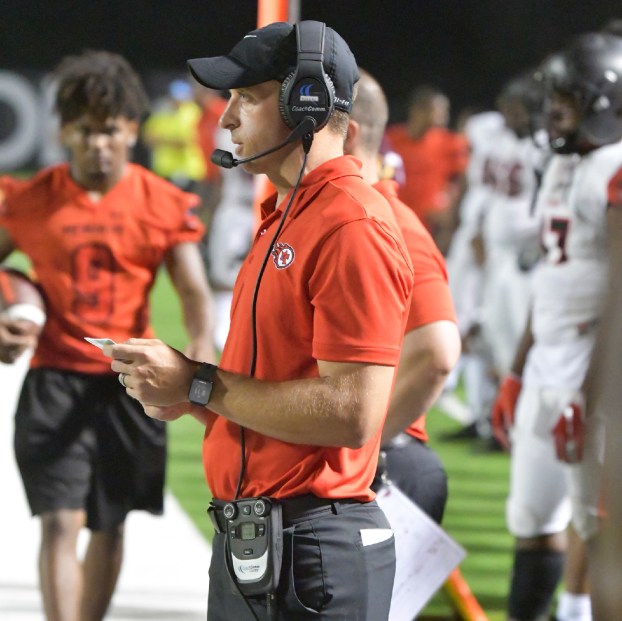 The Memorial Titans get to enjoy a week of rest before kicking off District 9-5A Division I play against Galena Park on Sept. 28.

The Titans (3-0) are coming off of a 10-3 victory over Beaumont United at BISD Memorial Stadium on Friday.

“We wanted to be 3-0 the first part of the season,” Memorial head coach Brian Morgan said. “It’s huge. We played well the first two weeks and just didn’t get it done offensively tonight. Our defense showed why they are really good and we came out of here with a win — as ugly as it was.”

The usually efficient Memorial offense couldn’t find the “Titan Tempo,” gaining only 129 yards of total offense. The Titans struggled with low snaps from the third-string center, which threw off the timing of both the running and passing games.

Memorial’s defense held its own, allowing only 147 yards of offense.

Following a Titan turnover in a 3-3 game, the Timberwolves were unable to get a first down and a low punt turned into a turnover on downs at the United 10-yard line.

Memorial’s offense finally saw some light when quarterback Kam Ladia found Teajawon Mack in the end zone for a 7-yard touchdown with 6:11 left in the game.

The game was unusual for an offense that was able to put up a combined 95 points in the first two games of the season.

“(The change at center) affected Kam (Ladia) a lot,” Morgan said. “He was worried about getting the snap. There’s a lot of stuff that he had that we’ll see on film, but when he’s fumbling around with the ball, he can get it handed off. He can’t get it thrown. I think it rattled him a little bit just not being comfortable.”

Morgan said winning a sloppy game can help as they move closer to district play.

“Down the road, there is going to be some close games, in district or past district, and we have to be able to know that we can execute it on both sides of the ball.”

The Titans started the season with a 48-20 win over Deer Park before defeating Houston Madison 47-14, both games in Port Arthur. Despite only having 9 yards rushing last game, the Titans have accumulated 414 yards on the ground throughout the first three games of the season (138 ypg).

The Titans will look to get the rushing game back on track as they host Galena Park.

The Yellowjackets (2-1) have a bye week this week as well following their 15-9 loss to Baytown Lee on Friday.

Kickoff is scheduled for 7 p.m. at Port Arthur’s Memorial Stadium.