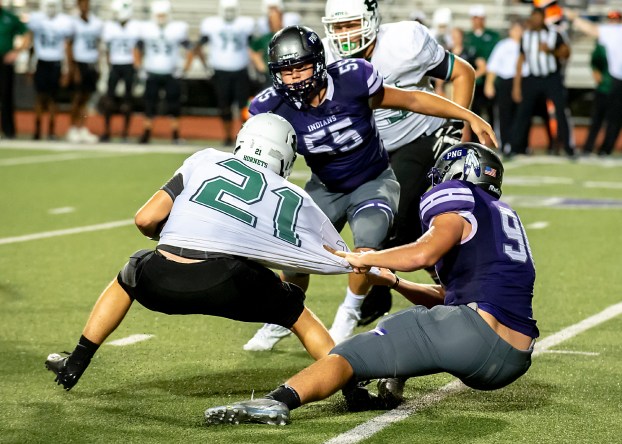 John Nichols (55) and Josh Patteson of PNG bring down Cameron Myers of Huntsville during last Friday’s game in Port Neches. (Brian Vincent/Special to The News) 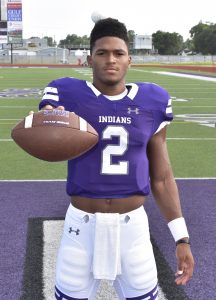 PORT NECHES — Given the amount of rain that has fallen on Jefferson County, Port Neches-Groves may feel fortunate to play a Saturday game.

The rain did not allow the Indians (1-1) to practice Monday, but that left them with four more days to work with before visiting Tomball.

“It’s kind of a playoff itinerary,” 10th-year PNG head coach Brandon Faircloth said. “Sometimes, you can play in the playoffs on a Saturday. I’m glad our team gets the chance. If we can make the playoffs, you can say you got to do it at least one time this year.”

Faircloth said PNG senior quarterback and University of Texas commit Roschon Johnson is still “day-to-day” with an ankle sprain he sustained with 9:50 remaining in last Friday’s home loss to Huntsville. The third-year starter has not missed a varsity game in his career.

“If it were a playoff game, he could play,” Faircloth said. “He’s getting treatment every day on his ankle. We’re blessed that’s all it was.

“He’ll be wanting to get out there. If he doesn’t, we’ll have to tell him not to. He’s already trying to work hard to get in there.”

Faircloth did say that Grant Rogers and Blake Bost would take some snaps against Tomball, but did not name a starter. Rogers completed 2 of 4 passes for 39 yards in relief against Huntsville.

The loss was PNG’s first at The Reservation since losing to Nederland 30-27 in the 2015 Bum Phillips Bowl, ending a 12-game home winning streak. It came against a Huntsville team that tied Magnolia West for the District 20-5A title last season.

“We want to know what our weaknesses are,” Faircloth said, adding better blocking and tackling are fundamentals the Indians have to improve on. “The only way to find that out is to play good people. Huntsville’s a great team. We had some injuries and some cramping. It wasn’t our night.

“That’s going to happen in non-district. We’ve got to know what we’ve got to work on, and Tomball is another tough opponent.”

Tomball (1-1) was in Huntsville’s district last year, but the Cougars have been realigned into 8-5A Division II, which includes defending state champion College Station. Led by former West Brook coach Kevin Flanigan, Tomball recovered from a 41-18 loss to next-door rival Tomball Memorial to beat one of Port Neches-Groves’ new 12-5A-II opponents, Santa Fe, 20-19.

“They have a really solid quarterback,” Faircloth said of Tomball. “They’ll be tough on our pass defense. They’ve got a really talented running back. We’ve got our work cut out for us. We’ve got to go out there, have a good game, protect the football and get some turnovers, and hopefully things will bounce our way.”

After five sets with Barbers Hill, Nederland is 2-0 in District 21-5A. Meg Sheppard and Karley McGill each made 14... read more