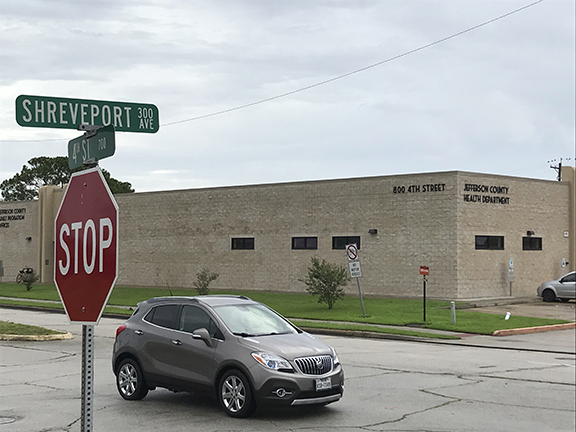 The proposed townhouse development would include 118 units for lease on land owned by the Port Arthur Economic Development Corp. on Fourth Street, across from the Jefferson County Health Department office. (Ken Stickney/The News)

The Port Arthur Economic Development Corp. proposed before the City Council this week construction of 118 housing units, townhomes that would be developed by the National Development Council on EDC land and leased at affordable rates in the heart of the city’s downtown.

CEO Floyd Batiste said the NDC would invest $9 million in the $24 million project, and proposed to the council members that General Land Office money and Rebuild Texas funds might provide the rest.

“The intent is to bring people here (downtown) every day,” Batiste said. “When you have that number of people downtown, private investment can come in.”

Batiste said the townhomes would complement downtown construction of 60 single-family homes that is underway. Several homes are under construction nearby on Sixth Street.

The townhomes would range in lease prices from $658.46 a month for 24 one-bedroom units to $864.23 for 70 two-bedroom units to $923.78 for 24 three-bedroom units. They would be built on Fourth Street between Shreveport and Mobile avenues, between the Museum of the Gulf Coast and Lamar State College Port Arthur, facing the Jefferson County Health Unit.

The NDC, a 50-year-old national non-profit based in New York, would own and lease the townhomes. The NDC’s mission, as stated on its website, is “to increase the flow of capital for investment in low-income communities.”

Batiste said the lease price range is not aimed at low-income people but would encourage people with discretionary income to live downtown, which would, in turn, encourage businesses — pharmacies and small groceries, perhaps — to invest downtown. He said he has been talking with a prospective coffee shop developer for downtown.

Batiste said he is asking the City Council not for money, but for its support.

In presenting the idea at Tuesday’s City Council meeting, Batiste recounted the EDC’s decade-long efforts for downtown revitalization, which included investments in the 501 Procter building, construction of the Pavilion, student housing at Lamar State College Port Arthur, downtown infrastructure efforts and establishment of parks. Development of the townhomes would be the most ambitious of the projects since the student housing was built.

He said construction on the EDC site, more than three acres, would start when the funding is secured.

“We feel very good about it,” he said outside the City Council chambers.

“You’ve got to get the council and citizens on board with it,” he said.