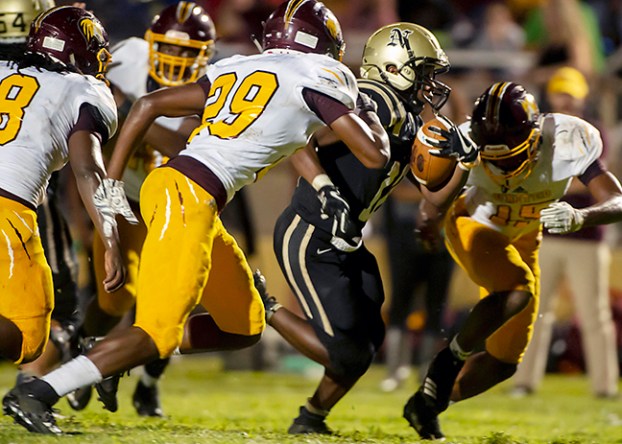 The Nederland Bulldogs (2-0) will try to remain undefeated and the Silsbee Tigers (0-2) will look for their first win Friday.

While the records show an uneven matchup, the Bulldogs are staying on guard as they travel to Silsbee.

“The first thing we told our team is to not look at the record,”Nedelrand head coach Monte Barrow said. “They’ve played a very good Port Neches team and a very good Newton team, who’s probably going to win the state championship again. The 0-2 is not a factor for us.”

The Tigers are coming off of a 56-14 loss to Newton and opened up the season with a 48-14 loss to PNG. In both games, Silsbee scored on the opening drives of both games to take 7-0 lead.

“I think the thing that has got them is numbers,” Barrow said. “They might have gotten tired later in games. Port Neches has more people on the sideline. What we all know, and what we’ve told our kids, if (Silsbee) is in a game in the fourth quarter, adrenaline can overcome a lot of that fatigue.

Part of Silsbee fast start has been the ability to make big plays using their speed. Against PNG, Silsbee capped off their first drive with a 56-yard pass.

“We have to get them before they get going,” Barrow said. “I don’t think we are going to catch them form behind. The toughest thing is that is hard to simulate in practice. The speed that they have and the angles you take on a guy that’s running in practice might not be the same angle on Friday. We can’t let them get going we don’t want it turning into a track meet.”

Nederland is coming off of a 33-14 victory of Beaumont United at Bulldog Stadium.

Senior quarterback Blaysin Fernandez will start against Silsbee Friday despite not returning in the second half against the Timberwolves with a shoulder injury. After the game, Barrow said that Fernandez could’ve returned if necessary but wanted to take it easy seeing as how Fernandez missed the first game with a knee injury.

“He was fine Monday,” Barrow said of Fernandez. “He took the snaps with the first team all week. He is ready to go. He’s not the type to stand over there and be still. He’s always itching to go in. That was tough for him.”

Barrow said it was good to get backup quarterback Bryce McMorris some reps.

This will be the Tigers’ first home game of the season.

“We are telling our guys to remember what it was like to play at home for the first time last week,” Barrow said. “Those guys are going to have that same feeling. They are going to come out excited to play in front of their home fans.”

Kickoff is set for 7:30 at Tiger Stadium Friday.

By Dave Hogg DETROIT — For five innings, the Houston Astros were one pitch away from blowing an important game.... read more