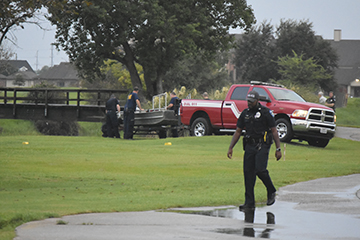 Port Arthur police and firefighters were called to a canal on the Babe Zaharias Golf Course in Port Arthur where the body of a Port Neches man was found on Wednesday. Mary Meaux/The News

First responders recovered the body of a Port Neches man, missing for about three days, who was found in a canal on the Babe Zaharias Golf Course in Port Arthur on Wednesday night. No foul play is suspected.

Investigators believe the victim, whose identity was revealed as Ryan Kristopher Miller, 39, Thursday morning, may have entered the canal system at another point, perhaps as far away as Saba Lane in Port Neches, and the body may have continued floating in the canal system in high water as far as the golf course, where it was recovered near the clubhouse.

A member of professional football player Jamaal Charles’ family was at the scene Wednesday night and was visibly upset at the news. Local media has reported that Miller is a cousin to Charles.

Jefferson County Justice of the Peace Pct. 7 Brad Burnett said just before 6 p.m. Wednesday a person in the nearby apartments called police after seeing a body in the water. Port Arthur Fire Department used a boat to retrieve the body, which was near a bridge on the first hole of the golf course, working into the darkness.

Burnett identified the victim Thursday morning and said the victim died by drowning, although he said that information was tentative. He said Miller’s wallet with money in it was still on him.

He was fully dressed with tennis shoes on, Burnett said, which suggested the death was accidental. A toxicology report is pending.

He said he had met with family members, whom he identified as “a very good, kind family.”