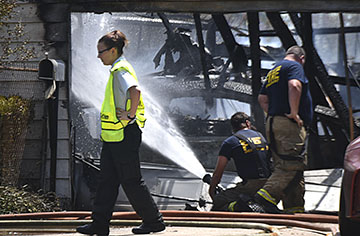 FILE PHOTO — A person with Acadian Ambulance walks past a firefighter during a house fire in the 1100 block of Trinity on Aug. 3. Mary Meaux/The News

Investigations into two separate fatal fires in the city remain under investigation with little details available at this time.

Firefighters got the call of the blaze at Arthur Square Apartment complex, 1401 Poole Ave., shortly after midnight July 4. While there they found three children alone in an apartment.

The children were transported to the Medical Center of Southeast Texas where they perished from smoke inhalation. There are identified as Brooklyn McCray, 2; Jayden Pollard, 12; and Brayden Handy, 6.

The mother said one of her other children had had an asthma attack and she brought that child and two others to the hospital, leaving three victims behind.

The fire involved the most fatalities related to a single fire in Port Arthur since a garage apartment fire in 2009.

The fire that took the life of Francisco Zepeda, 60, and left his son Daniel Zepeda, 28, critically injured was deemed accidental in nature, Washburn said.

The exact cause remains undetermined as officials wait for the younger Zepeda’s health to improve before speaking to him.

The father and son were in the garage of a home in the 1100 block of Trinity Avenue when the fire occurred just before 2 p.m. Aug. 3.

The fire was primarily in the garage but was spreading inside the attic and to the inside of the home. They were able to stop the spread of the fire but the home received extensive smoke damage.

When firefighters arrived they found two male victims with extensive burns outside the garage. They were transported via Acadian Ambulance to an off-site location and flown via medical helicopter to the Galveston Burn Unit.