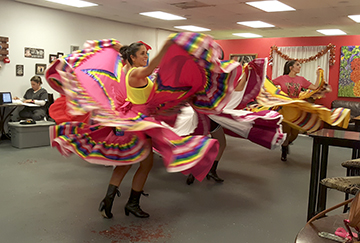 Dana Esqueda Wiltz practices with other past folkloric dancers at a Groves coffee shop on Wednesday in preparation for the 50th annual Mexican Heritage Fiesta on Saturday. Mary Meaux/The News

The women’s vibrant colored skirts swirled hypnotically as their shoes clicked in unison on the concrete floor inside a Groves coffee shop Wednesday night.

Two women manned a table off to the side where the music was set up while the folkloric dancers alumni — now ‘soccer moms’ — rehearse. Their big day is Saturday where they will perform as part of the Mexican Heritage Society’s 50th Annual Fiesta.

So far 20 former folkloric dancers are signed up to participate, some of whom have been traveling from Houston during the middle of the week just to practice then drive back home after. And the oldest is 61.

One of the alumni, Jessica Booth Daniel, said the idea of coming back together to perform started as an idea between the women that spread like wildfire.

It’s not just the dancers who are coming back in honor of the 50th anniversary of the Fiesta, the queens will join them as well. 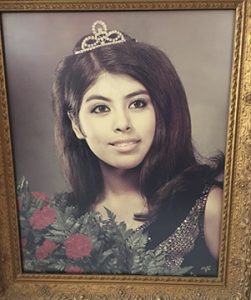 Christine Juarez Vasquez was the first Mexican Heritage Fiesta queen only back then she was called Miss Mexico of Port Arthur, she said of the event that was sponsored by the Greater Port Arthur Chamber of Commerce.

A current resident of League City, Vasquez is retired from the University of Houston after working there 27 years. She is excited to come back to Port Arthur, seeing all of the past queens and meeting the more recent ones.

Vasquez has a scrapbook where, she said, has clippings from her time as queen. At that time the Fiesta was held in Jefferson City Shopping Center on Twin City Highway.

Not a week went by that Vasquez wasn’t being invited to some sort of event — from Cavoilcade and other parades to meeting Miss America to chamber-sponsored events and ribbon cuttings.

“It was such a fun year,” she said. “It was so exciting. I loved it. You can say it brought out my personality. I was a little bit shy before but the pageant gave me confidence and courage to go out and meet people. Now I’m very social as a result of that.”

Cassie Esqueda Guy was crowned queen in 2003 and is also a folkloric dancer and will take part in the Fiesta on Saturday.

“Some of my earliest memories are of attending the Fiesta,” Guy, who started dance at 2 ½, said. “And involvement with the organization (Mexican Heritage Society) provided me with so many opportunities.”

“I feel like they’ve given me so much and I’m so very proud of my heritage and for me to do this and give back to the community and now, with my children involved. I want them to have the same experiences I had while attending with my mom and dad and sister.”

Tropical Storm Harvey put a damper on last year’s 49th annual celebration but it didn’t stop the festivities. The Robert A. “Bob” Bowers Civic Center — the site for the Fiesta — was affected by Harvey’s floodwaters so organizers moved the celebration to the pavilion on Procter Street in downtown Port Arthur.

It was deemed a success. 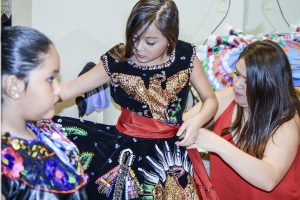 The Fiesta, which celebrates Mexico’s independence from Spain, will feature pageants, live bands including a mariachi group, food, dancing, a raffle, face painting and more.

Admission fees for the entire event will be: