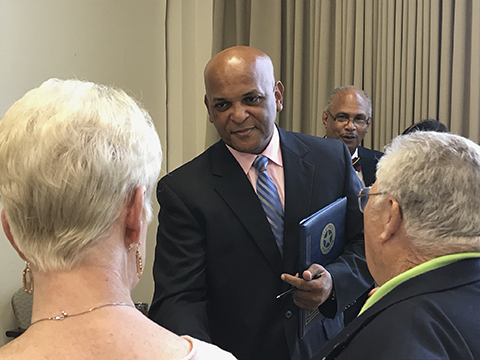 Hail to the new chief: Duriso gets hearty welcome home

For new Port Arthur Police Chief Timothy Duriso, it was a homecoming.

More than 100 department employees, city leaders and citizens pressed into a reception area at City Hall on Tuesday evening, eager to meet the former Port Arthur officer who worked 13 years for the Police Department before launching a 20-year career with the Drug Enforcement Agency.

Duriso, 56, was hired Aug. 14, the final candidate standing among four finalists for the job. He replaced former Chief Patrick Melvin, who resigned under duress in the spring. Duriso’s first day was Monday.

“We are happy to have him here,” said Mayor Derrick Freeman. “We are looking forward to having him on board and moving this city forward.”

“The reception was overwhelming,” Duriso said after 90 minutes of handshakes and well wishes. But, he said, there’s work to be done.

Duriso said he’ll spend his first week on the job meeting with officers and getting a better feel for the department’s strengths and needs. He said the City Council has pledged its support and assured him of adequate resources.

His focus, he said, will be on the violent crime that has visited this city in 2018. In 2017, Port Arthur had five homicides; it has had 11 so far this year.

“He’s going to be an excellent leader,” said Deputy Chief John Owens, who’s overseen the department as acting chief since Melvin’s department. “I look forward to working with him to maintain a professional law enforcement agency that prides itself on integrity, trust and service to the community.”

Owens has resumed his duties as deputy chief and emergency management coordinator.

“He’s pro-community policing,” she said. “We’re very excited about that.”

Councilmembers, too, voiced support for the new chief.

Mayor Pro Tem Thomas Kinlaw said the chief has directives for addressing violent crime and for ensuring citizen safety, but the council will make sure he has enough resources to do the job.

“He knows the city, the personnel and what we have been going through as a city,” Councilman Cal Jones said. “He will do an excellent job for the city and the police department.”

Councilwoman Charlotte Moses said the new chief is “astute” and “on top of the job.”

“No. 1, I think officers look for management they can trust,” she said.

Councilman Harold Doucet said the chief and his department would enjoy mutual respect.

Gazing around at the large crowd, he added, “From the time the list was revealed not one person who knew of him or who knew him had a negative thing to say.

“I haven’t seen this many people here in a long time,” he added. “Councilmembers don’t draw crowds like this.”