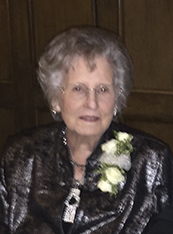 She was born on October 26, 1925 to her parents, William George Huff and Maggie Elizabeth Tyler Huff in Lampasas, Texas. Geneva has been a resident of the area for most of her life. She graduated from Thomas Jefferson High School in 1944. Geneva was a devoted housewife and worked as a salesperson with Electrolux for over 20 years. She was a longtime member of Holy Trinity Episcopal Church in Port Neches and a member of the Eastern Star.

Geneva was preceded in death by her parents, her sister, Yvonne Sadler, her daughter-in-law, Carol Shaw,  her son, James Melvin Shaw and her husband, Walter Church Shaw.

She is survived by her daughter, Lisa Martin and husband, Bobby of Port Neches, her son, Walter G. Shaw of Kenefick, Texas, her six grandchildren, Sarah Woodson (Jared), Bobby Martin (Rachel), Wally Shaw (Stephanie), Alfred Shaw (Arleena), Amanda Maybit (Luis) and Michael Shaw along with nine great grandchildren. She is also survived by her brother, Billy George Huff of Beaumont, Texas along with two nieces and nephew as well as her beloved cat, Frankie.

The family would like to give a special Thanks to all her caregivers that helped with her and Walter over the last several years, your kindness and devotion was greatly appreciated.

Visitation will be on Thursday, September 6, 2018 from 4:00 PM till 7:00 PM at Clayton Thompson Funeral Home in Groves. Service to honor Geneva’s life will be at 10:00 AM Friday, September 7, 2018 at Holy Trinity Episcopal Church in Port Neches, Texas with Rev. Mark Chambers, officiating. Burial will follow in Greenlawn Memorial Park under the direction of Clayton Thompson.