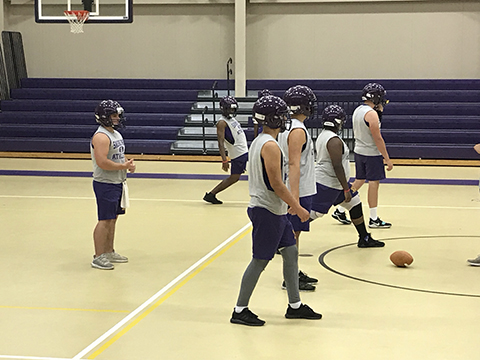 SABINE PASS — By the numbers, coach Jason Thibodeaux’s squad is short before they step on the field.

The Sharks have 17 on the roster, which means some players play offense and defense, never feeling the bench.

But Thibodeaux is rich in leadership, with seven seniors suiting up on Friday nights this fall. He counts most on fourth-year players like Logan Odom and Kirk Blood, who say they’ve relished the brotherhood that forms on a small, oftentimes outmanned squad.

“There’s nothing I wouldn’t do for those kids,” Thibodeaux said. “They love the game and they love the competition.”

The two have celebrated the highs that came with making the playoffs in 2016, a rarity for tiny Sabine Pass. They experienced the disappointment that came, too, with a hurricane-shortened 2017 season, when the team played just five games.

Odom said a highlight of his career was the Sharks’ 2016 game against Burkeville, a four-overtimes contest in which Sabine Pass triumped. 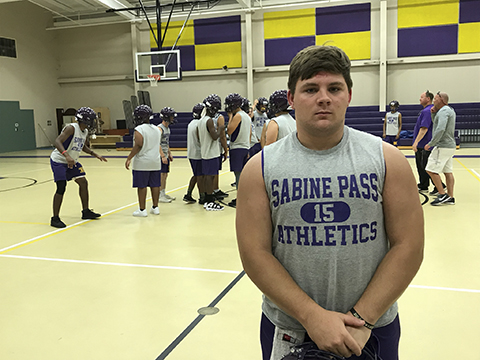 “You learn how many hits you can endure and stay in a state of mind where you don’t think about quitting,” he said. “I knew we would be successful after that.”

Blood followed a line of brothers who’ve also played at Sabine Pass. He’s been around the program in middle school and was manager for three years before playing.

“Football has changed me,” he said during practice Wednesday. “It has made more more confident.”

Odom, who lives in Port Arthur with his grandfather, Rivers Romero, has attended Sabine Pass since first grade. He and his family appreciated the elite academics at Sabine Pass, which enrolls many Port Arthur students.

Blood, son of Ethan and Jennifer Blood, has lived in Sabine Pass — “our sanctuary,” he calls it — his entire life.

Odom and Blood are both good students, with grade point averages in the 3.6-3.7 range. Odom said he’s considering Lamar Institute of Technology, where he might study instrumentation in hopes of catching on at an area industrial plant, or Lamar University. Blood has his eyes on Lamar University, although he’ll apply to other four-year schools. The goal is a computer science degree with secondary education certification.

Both would relish a chance to walk on for Lamar’s team, and both have fine-tuned their bodies to play football. Both list themselves as around  5-foot-8, both in the 205-210 pound range, both agile enough to play linebacker at Sabine Pass.

Both play second sports, too: Odom plays third base for the baseball team; Blood plays doubles for the tennis team.

They’ve learned a lot, too, by playing football. Odom says he’s learned “to never panic,” that “God has an answer for everything.”

“Always push yourself; never give up,” Blood said. “Always fight hard in the moment.

“There’s never been a moment when I didn’t think we had a fighting chance.”

NFL: Thomas to return to Seahawks

West Orange-Stark graduate Earl Thomas announced Wednesday that he would end his months-long holdout with the Seattle Seahawks. In an... read more