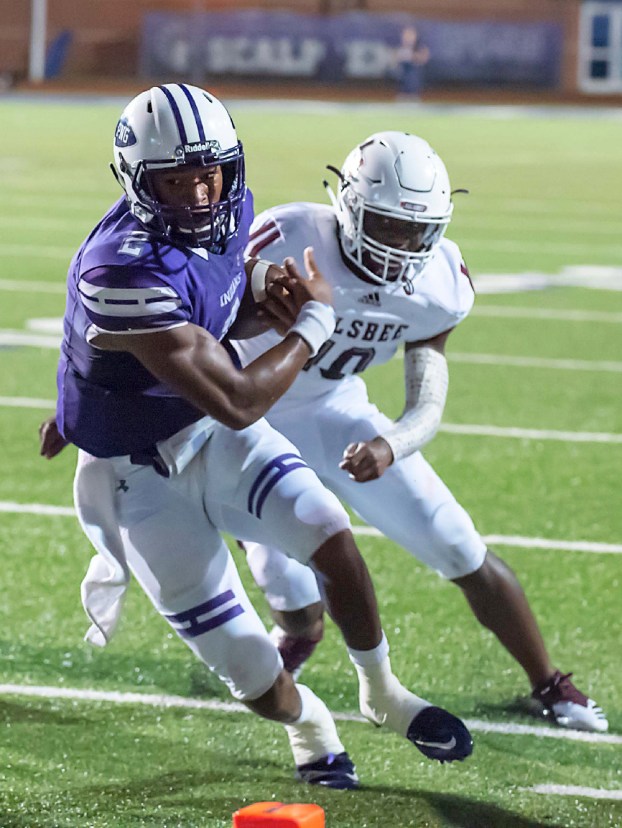 Port Neches-Groves’ Roschon Johnson (2) eyes the end zone on his way to a first-quarter touchdown against Silsbee Friday at The Reservation. (Brian Vincent/Special to The News) 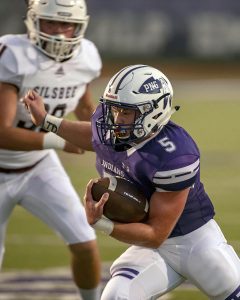 Gavin Deslatte of PNG finds a hole to run through against Silsbee on Friday in Port Neches. (Brian Vincent/Special to The News) 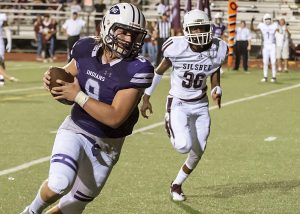 Port Neches-Groves’ Cooper Hammond takes a short pass in for a second quarter touchdown against Silsbee on Friday at The Reservation in Port Neches. (Brian Vincent/Special to The News) 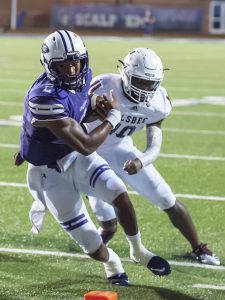 Port Neches-Groves’ Roschon Johnson (2) eyes the end zone on his way to a first-quarter touchdown against Silsbee Friday at The Reservation. (Brian Vincent/Special to The News)

PORT NECHES — Roschon Johnson proved to be in midseason form as the Port Neches-Groves Indians defeated the Silsbee Tigers 48-14 at The Reservation on Friday.

Johnson was nearly perfect in the first quarter going 7 for 8 for 66 yards. Johnson’s only incompletion came on a well-placed ball that was dropped by Jose Ceja. Despite the drop, the receiver led the team with eight receptions for 90 yards.

Ceja also caught the first completion of the game from Johnson.

The night belonged to the Johnson, who is committed to the University of Texas. Johnson finished the game with 351 yards of offense.

The game started off looking like a heavyweight fight as Silsbee opened up the game by capping off their first drive with a 56-yard touchdown pass from Corben Johnson to Darshon Turk.

The Indians responded with a drive of their own which ended with running back Gavin Deslatte scampering for 16 yards with 7:23 left in the first half. PNG’s defense would force its first punt of the night, and the Indians didn’t take their foot off the gas as Johnson pushed through and took the lead with a 7-yard run in the closing seconds of the first quarter.

The game turned when …

With 15 seconds left in the first half and trailing 28-14, Silsbee had the ball on the PNG 20. The Tigers ran a trick play that had receiver Cameron White throwing ball. White had a receiver open in the end zone, but lost the handle on the pass and had it intercepted by linebacker Wyatt Girouard, who returned it for an 82-yard pick-six, breaking multiple tackles as the half expired. The potential 14-point swing put the Indians up 35-14 at half.

“I don’t think we’ve ever had a play like that happen at the Reservation,” PNG head coach Brandon Faircloth said. “That was a special play and really got the crowd into it.”

Without question, Johnson, who finished 18-27 with 247 yards passing and 18 carries for 104 yards (five total touchdowns). Johnson converted on numerous fourth downs ramming forward and spread the ball around to seven different targets.

“He was just taking what the defense was giving him,” Faircloth said. “He’s really good at staying poised and just working through his progressions.”

The battle of the two undefeated teams will take place at The Reservation. Kickoff is set for 7:30 p.m.

The new kickoff fair-catch rule apparently did not cause Memorial senior JaVontae Hopkins to think twice about returning the ball... read more