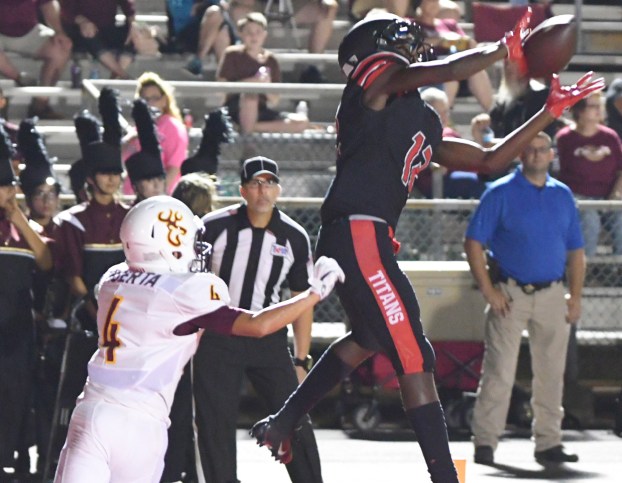 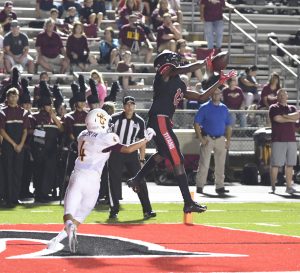 Kenneth Washington of Memorial catches a 17-yard touchdown pass as Kaleb Huerta of Deer Park defenses him Friday in Port Arthur. (Jereem Augustine/Special to The News) 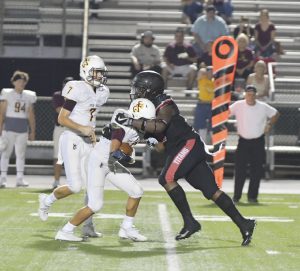 Da’Juan McMillian of Memorial stops a Deer Park ballcarrier cold for a loss Friday night in Port Arthur. (Jereem Augustine/Special to The News) 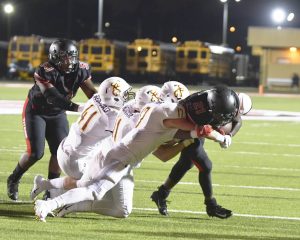 The new kickoff fair-catch rule apparently did not cause Memorial senior JaVontae Hopkins to think twice about returning the ball from the goal line.

Instead, the speedster went 68 yards to set up the Titans’ fourth scoring drive of the night.

That was Hopkins’ second big play of the night, as he and the Port Arthur team handed coach Brian Morgan his first career victory on his 35th birthday Friday, 48-20 over Deer Park at Memorial Stadium.

Hopkins, a standout cornerback, snapped a momentum-building Deer Park drive with a 60-yard interception return for a touchdown. That gave the Titans (1-0) a 24-3 lead with 7:45 left before halftime, just as the Deer (0-1) had moved into Memorial territory in three plays from their own 37.

Deer Park, the District 22-6A champion last season, also debuted a new head coach in alumnus and former NAIA offensive coordinator Austin Flynn. But things headed south for his new team right from the start, as they fumbled the opening kickoff.

That was one of four turnovers — three in the first half — for the Deer, who lost two of their five fumbles.

The Titans took the early lead in seven plays from the Deer 32, scoring on Kenny Pham’s 29-yard field goal. They made it 10-0 after blocking a punt and recovering it at the Deer 21, scoring on sophomore Branden Chaney’s 21-yard rush.

Kenneth Washington and Chan Rubin each hauled in 17-yard touchdown passes from senior Kam Ladia, who completed 16 of 30 passes for 166 yards and three TDs.

Deer Park got on the board, thanks to a 47-yard Alex Sanchez field goal early in the second quarter, and threatened to pull within 17-9 when Hopkins made his pick-six.

Tyrek Saylor got the Deer within 31-17 before the half on a 1-yard scamper.

The margin went back to 21 yards when Tavian Gipson’s 5-yard catch completed an eight-play, 55-yard march to open the second half. Sanchez then narrowed it with a 43-yard field goal, and Pham returned the favor early in the fourth with a 22-yarder.

Kason Williams became the sixth Titan to score a touchdown with 6:19 left in regulation. Williams, who finished with five rushes for 53 yards, had a long of 35 on the drive.

Had Hopkins either elected to waive fair catch or let the ball go out of bounds instead of his 68-yard kickoff return, Memorial would have fielded the ball at its own 25, under new national high school football rules. The policy was put in place in an effort to increase player safety on what is usually the game’s most dangerous play.

Memorial was dominant but not without penalties. The Titans were flagged 20 times for 155 yards. Deer Park was slapped with nine flags for 78 yards — including three straight false starts on a third-quarter drive.

Aside from short waves of momentum, it was just kicking off. Memorial’s recovery of Deer Park’s fumbled kickoff reception seemed to set the tone for the game.

The Deer nearly gave away another drive when Saylor, who had 77 yards on 21 carries, fumbled at the Titans’ 1 late in the second period. Wideout Michael Banda recovered the ball in the back of the end zone to prevent a second straight turnover following Hopkins’ interception.

Hopkins for his momentum-snapping, 60-yard pick-six and 68-yard kickoff return.

Brian Morgan has signed up for one big birthday party of sorts on Friday, and Port Arthur has been invited.... read more