A reporter’s tale: Harvey plus one year

A year after Tropical Storm Harvey flooded our community I flinch whenever it rains hard or thunders or when lightning flashes. I wonder if other people do, too.

It’s not because I had to be rescued or my house or vehicle flooded. But let me start my story earlier. 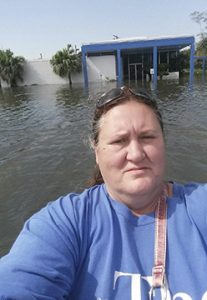 Not my best photo but it was hot and I was wading in water.

As Harvey approached I heard endless forecasts of doom and part of me didn’t believe it. It would be like other storm forecasts that never materialized.

I worked that day and got photos of a family boarding up their house. It was raining but not badly. Ho hum. 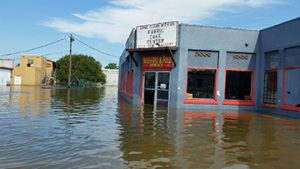 The water depth was deceptive when wading/walking. Some spots were ankle deep while others were deep. This was on 25th Street near Memorial Boulevard. I think it was taken Aug. 29, 2017.

Still, weather alerts came fast and furious. By the time I left the office for the short drive home, streets were flooding and I was worried by my little Hyundai Accent might not make it. 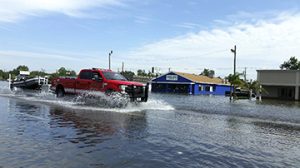 A first responder truck towing a boat passed by me on Memorial Boulevard. Water had went down enough for trucks to ride in the middle of some streets but parking lots held deeper water.

Reality set in soon enough. Overnight, I watched reports as Houston turned into a lake and boats traversed streets and highways. And the rain would not stop.

My leaky roof got worse and through the night our family dumped 5-gallon buckets of water at a time — upwards of 55 gallons at some point. I kept checking to see if my yard was underwater and it wasn’t.

Others didn’t fare as well. People begged for help on social media. It was gut wrenching to know I could not help. 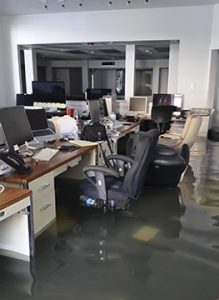 My desk after Harvey taken Aug. 31, 2018. The water had receded. I know this by the amount of water that was in the desk drawers and water marks on the wall.

Being a reporter comes with an adrenaline rush. I was eager to see what Harvey did to my city so I could accurately recount what was going on. I knew the story of Harvey needed to be told. But roads were impassable and I didn’t believe it. My street was OK.

Later, I traveled down 25th Street and parked, then waded to the office on Memorial Boulevard to salvage work supplies. My co-workers had been scattered, some rescued, and some were not available to work.

I tried to be the newsroom hero and failed, in my “I’m-tough-on-myself” opinion. I waded twice to the office to get the cameras and my laptop and other essentials.

I met, interviewed and photographed people setting out in boats, including some first responders, to rescue those in need.

I was given advice to hitch a ride with rescuers but was reluctant to take space set aside for someone in need.

The importance of chronicling this event was always on my mind as hours passed and I still look back at missed opportunities. There was a precarious nighttime drive down Twin City Highway, where I passed by Jimmy Johnson Boulevard and saw trucks and trailers lined up on high parts of an overpass and spotlights and people in boats.

But I kept going, either unsure of what I was seeing firsthand or for fear of drowning my car’s engine — maybe both.

Other media were in the midst of the floodwater or on the boats. I was elsewhere, doing what I could to tell the Harvey story. There were many areas of the city that were islands, I later learned.

I never stopped nor did the stories and photos. I was constantly on the phone or in the car or checking emails or writing. I walked in near waist-deep water and have photos to prove it. I am proud of the work I did.

The reporter in me still holds uncertainty and self-doubt that will always haunt me for not being everywhere at once.

Maybe that’s where that flinch comes from when a big storm hits and the anxiety sets in.

Mary Meaux is a reporter for The Port Arthur News.

Staff report Clean-up of a marine diesel fuel spill near the Port of Port Arthur was proceeding well Friday, with... read more