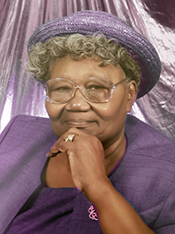 Born August 12, 1928, Della Mae Berry was the eighth child born to Rev. Milton Berry and Mrs. Effie Jackson Berry in Big Cane, Louisiana. When she became a teenager, she moved to Port Arthur, Texas and began her career in the Dietary Department at St. Mary’s Hospital. Della married Tom Gillam, Jr. September 19, 1947, and to this union, they were blessed with three children; Leroy, Tom III, and Tonya. She was a member of the Apostolic Church of Jesus Christ.