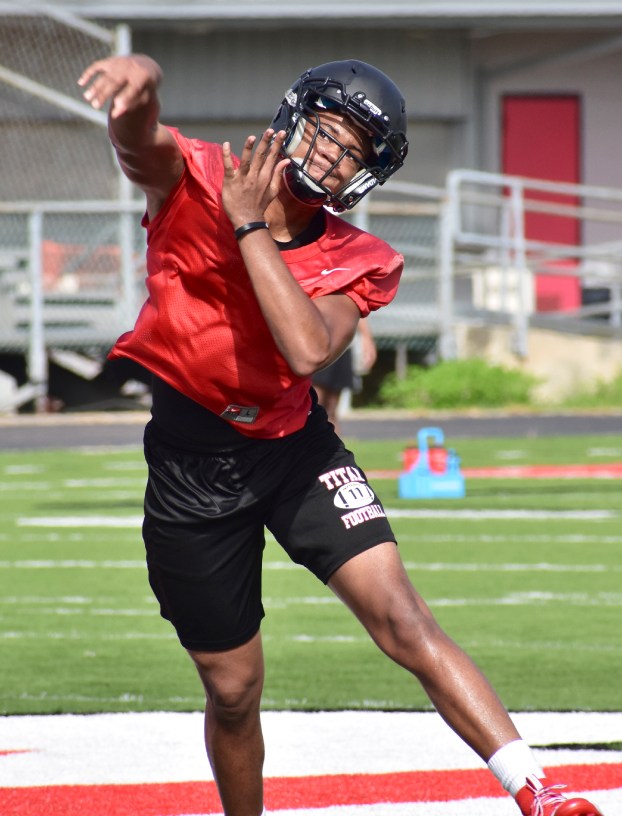 It wasn’t just a scene out of the 1993 football movie “The Program.”

“Coach Nunn always says, protect the ball at all times,” Ladia said. “So, hey, you gotta protect it.”

It’s also a way for Ladia to tote the rock the some more — on and off the field — in preparation for the Titans’ season opener against Deer Park at Memorial Stadium on Friday.

Ladia is the undoubted successor to now-Tulane linebacker Keitha Jones as Memorial’s starter under center, and he took charge in the Titans’ 24-7 scrimmage victory at Nederland on Thursday along with a few other playmakers looking to do more in 2018. Ladia completed 11 of 20 passes for 181 yards and two touchdowns.

“It was definitely a way to break the ice, you know what I mean?” Ladia said. “It was a way to start the season with good intentions on scoring a lot of points and moving fast. In the second half, we showed potential and really moved fast all the time.”

The Titans are deep in the backfield with junior Kason Williams and senior JaVontae’ Hopkins, a returning starter at cornerback, backing up Chaney. All three backs will gain some valuable experience in the season following the graduation of 1,401-yard rusher Elijah Hines.

“We’ve got a good idea going into it on who can play with Teajawon [Mack, inside receiver],” said Brian Morgan, who’ll make his official debut as the Titans’ head coach. “We all thought there would be an upside for Chaney. We thought Chaney could play after his ninth-grade year and what he’s done in the spring. I thought Kam played really well and made some good decisions. He got the ball to Teajawon. He got the ball to Gip [inside receiver Tavion Gipson]. Those guys had good years last year.

“We have some dynamic running backs,” he said. “We like to give them the ball as much as possible. The more the running game opens, the easier the passing game is.”

Morgan is calling for a “blackout” theme Friday, asking all Titans fans to wear black shirts to the game.

“We’ve got an atmosphere that is a game atmosphere where some teams are coming in here and going to be somewhat intimidated right before,” Morgan said. “Then, you add that to it, just bringing the community together for something, just a new regime, just trying to get some support and get some people on board, give everybody something to talk about and get on board for something new but some good change.”

FOOTBALL: Lamar kicks off with banquet