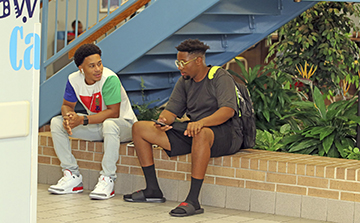 Higher education students headed to the first day of the fall semester at local colleges and universities Monday.

And in an odd twist, classes begin almost one year to the date that Tropical Storm Harvey led to historic flooding. 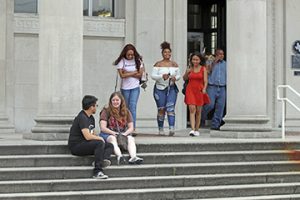 Students made their way to class during the first day of the Fall 2018 semester at Lamar State College Port Arthur on Monday, Aug. 27.
Courtesy Gerry Dickert/LSCPA

The first day of classes for Lamar State College Port Arthur went off without a problem Monday as the campus welcomed students from across the region for the fall 2018 semester.

“It’s a relief to have the first day of class start on time and without drama,” Betty Reynard, president of LSCPA, said. “There were a lot of excited students ready to get to work and we were happy to see them here today.”

In back-to-back semesters, classes were delayed due to weather related issues — Hurricane Harvey in fall 2017 and an unlikely snowstorm at the start of the spring 2018 semester. Aside from scattered rain across Port Arthur, the first day of class turned out to be more about the laughter of new and continuing students as they passed between classes, Gerry Dickert, public information coordinator for LSCPA, said.

“There was a level of excitement and fun here today that a lot of students really needed in their lives,” Kim Davison, president of the Student Government Association, said. “We’ve all been through so much in the past year, it’s time for us to get started in a positive direction. That’s what this week is all about at LSCPA, working on making the future better.”

The college has seen a 2 percent increase in its fall 2018 enrollment over fall 2017 numbers. Expectations are that those numbers will improve further as students continue to register through the first week of school.

LSCPA’s students were met with a freshly renovated Madison Monroe Education Building as the final touches to a half-million dollar upgrade came together this past week. A donation by Texaco retiree Ed Hogenson and his daughter, Debbie Spittler, led to a complete overhaul of one of the oldest buildings on campus. New paint, light fixtures, carpet, furniture and computer equipment were part of the project.

Hogenson intended his donation to benefit the college’s business programs, where his daughter had gotten her start as a young student.

Other improvements on campus include a new covered area adjacent to the cafeteria where students will be able to sit for meals or studying, new furniture in the Student Center and the Gates Memorial Library as well as outside the Sheila McCarthy Umphrey Industrial Technology Center.

In addition there are information stations to help students at the Performing Arts Center, Student Center and the Madison Monroe Building on Monday and Tuesday. 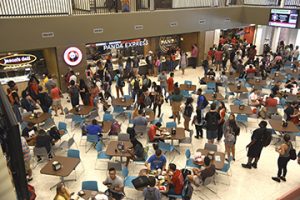 A photo in front of the newly remodeled Setzer Student Center at Lamar University campus in Beaumont during the first day of the fall semester on Monday.
Courtesy Brian Sattler/LU

Classes also begin Monday at Lamar University in Beaumont in what administrators, faculty and staff hope is a more “normal” year than that of a year ago, when Hurricane Harvey’s impacts on Southeast Texas devastated surrounding communities, flooding homes and disrupting lives, Brian Sattler, director of public relations at LU, said.

This fall enrollment projections are good overall despite challenges lingering a year later. (Final enrollment numbers won’t be available until later in the semester.) 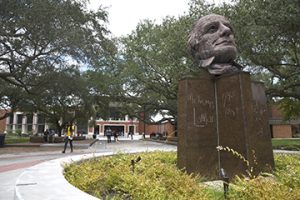 Students walk between classes past the statue or Mirabeau B. Lamar on the Lamar University campus in Beaumont during the first day of the fall semester on Monday.
Courtesy Brian Sattler/LU

Last year, LU leaders developed innovative hybrid online courses for students who couldn’t make face-to-face classes and a number of other accommodations to ensure students could begin the semester, if at all possible.

To help students get started on the right foot, LU’s Week of Welcome is underway with a variety of activities throughout the week to help students navigate the beginning of their college experience. 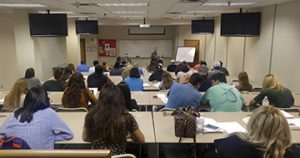 Students take part in the first class day of the fall semester at Lamar State College-Orange on Monday.
Amy Moore/LSC-O

Officials with LSC-O said they were encouraged with early enrollment numbers, especially after taking an enrollment hit because of last year’s storm.

“Headcount for fall 2018 is slightly up over last fall semester and we look forward to seeing our numbers grow as we continue to accept students for classes this semester,” Amy Moore, director of public information at LSC-O, said. “We appreciate that our students chose LSC-O and we understand the role we play in their success. What LSC-O students learn at our two-year college prepares them to earn four-year degrees and makes them workplace ready.

“Lamar State College–Orange is a great place for any and everyone to start their college experience.”

One year ago Shannon Sams-Green was standing in waist deep water reluctantly wrapping her 7-week-old son in trash bags and... read more