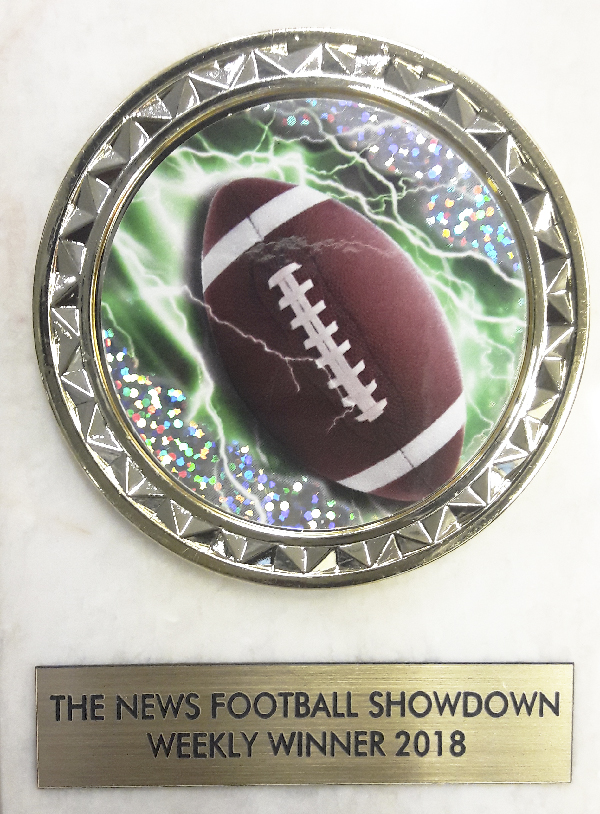 A mini-plaque awarded to each contestant with the best win-loss record in The News' Football Showdown. (I.C. Murrell/The News)

The Port Arthur News will begin a new season of the Football Showdown, a weekly pick ‘em contest, with 15 games for readers to choose from in Wednesday’s issue and six new celebrity guessers.

As in past years, readers may participate by dropping their selections inside a box at The News’ office, now located at 2349 Memorial Blvd. The Football Showdown was canceled for the 2017 season as locals focused on rebuilding efforts after the impact of Tropical Storm Harvey and a portion of the District 22-5A football schedule was staggered to weeknights to make up games in time for the UIL playoffs.

This time, the forecast calls for a season of forecasting football. While turning in picks to The News’ office will still be an option, readers can also email their selections to Pinnt at jpinnt@gt.rr.com.

Each competitor with the best win-loss record will receive a mini-plaque and a $25 gift card to Buffalo Wild Wings (or if a tie exists, trophies will still be awarded but a tiebreaker will be enacted to determine the gift card winner. See official rules below:)

(PLEASE READ as rules have been updated from past years **updated 8/28/18 to emphasize giving name, address and phone number to make entries official**)

District play won’t start for another month, at least among Jefferson County’s three 5A high schools. But this is the... read more