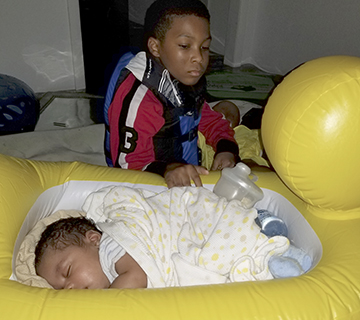 Baby KhiRynn, then 7-weeks-old, is carefully wrapped and placed in a duck floaty to keep him safe during Tropical Storm Harvey’s flooding last year. Courtesy photo

One year ago Shannon Sams-Green was standing in waist deep water reluctantly wrapping her 7-week-old son in trash bags and setting him in a floaty while tending to her two other children and two nephews.

And like the Biblical Moses being set adrift so was Sam’s baby only this wasn’t the Nile River, this was Tropical Storm Harvey.

Life has come full circle since that night in late August 2017 when, after enduring physical and emotional trials, she was forced out of her home by rising floodwaters in search for safety. 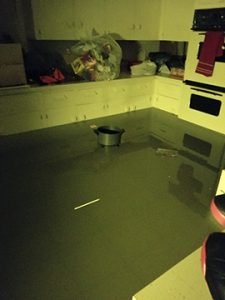 Sams-Green, a teacher at Travis Elementary School, is originally from Port Arthur and moved to Houston as a child but Port Arthur was where she spent weekends and holidays. Later she moved to Baton Rouge where she lost everything in the 2016 flood.

“As we left there were cars floating on the service road,” Sams-Green said.

She moved back to Port Arthur and found a teaching job then a year later Harvey hit.

“We were literally flooded in two different directions, front and back. I had water to my waist. I had just had my son 7 weeks prior and was watching my nephews so it was me and five kids and our front yard looked like the Gulf of Mexico. I felt like we were in an aquarium inside looking out. We were in the house in water surrounding everything and the couches were floating.”

But Sams-Green was prepared for the storm; her car was packed and ready because she was going to go to Houston but canceled the plans because her oldest son, 15 at the time, was to start welding classes in high school. So instead of leaving she watched as Houston flooded from her TV while Port Arthur was being flooded.

“I literally sat there watching the news with my son and we look down and water is coming through the walls,” she said.

She knew she had to stay calm for the kids so she began moving stuff to higher ground, so to speak, and even blew up an air mattress on the dining room table. Noises outside that she thought were helicopters were actually rain and wind and by the time she decided she need to leave it was too late.

She called her brother but learned emergency workers were working a fire in the flood. The wait for rescue turned in to hours.

“I called 911 and they told me to put something in the window, hang something white outside. I said I can’t. They asked if I could get to the roof, I said no ma’am. Everything she suggested I couldn’t do,” she said.

One of the kids called to her that the bed was taking on water and she yelled back and told them not to get off the bed.

“No one came,” she said looking back. She expected maybe a helicopter, anything. So she made her way to the front door and placed a white towel. “I heard something moving in the house and I knew I was the only one moving in the house. There was a snake in my house. That’s what did it for me. I did the girl thing and screamed then crushed it in the eave of the door. That did it for me. I posted on Facebook (that I needed help).”

The post was made Aug. 30, 2017 and calls for rescue were unmet as the city went underwater. 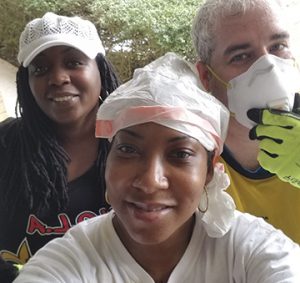 The rescue, and life after Harvey

A man with Gonzales Fire Department rescued the family in a boat and they eventually made it to Max Bowl, which was turned into a shelter.

Unlike the flood in Baton Rouge there was no place to stay immediately after Harvey so the family made it way to Houston.

“No hotels were available at all. I was commuting back and forth from Houston. I would wake up at 3 in the morning and be on the road by 5 and get here by 7:26 a.m. so my son wouldn’t miss his welding class,” she said. “Then turn around and go back after work because there was nothing I could do here.” 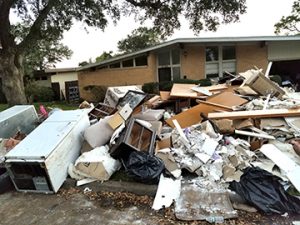 Eventually she found a hotel and called it home for six months until her home was repaired. But in those six months she wondered how long she could persevere, how long she could continue to wake up at 3 and go through the routine while dealing with a newborn and lack of sleep that comes with the territory. 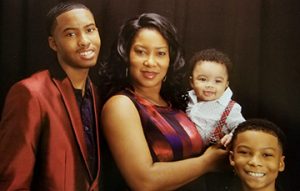 “We flooded two times back to back and lost everything both times,” she said. “My children are able to keep me optimistic and depression didn’t come until later. It’s a constant mental and emotional battle but one thing stood out. My middle son was interviewed by the (TV) news at school and they asked him about Baton Rouge too. He said everything is bad now and things are questionable but he knows it’s all part of God’s plan and something bigger and better is yet to come. When I got down I thought of that.”

Her kids never complained not even when they had to get up at 3 a.m. They didn’t complain about what they lost or their situation. They put their faith in God.

“It was a blessing in disguise for me,” she said. “I just hope whoever goes through this can trust and stay encouraged and don’t give up, in the words of my son, it’s part of God’s plan. It happened that way for a reason. Don’t let it stop you. It’s not how many times you are kicked down but how many times you get back up.”

PA park to get upgrade

By Lorenzo Salinas l.v.salinas@panews.com Port Arthur residents looking for a better place to play may be in luck next month.... read more