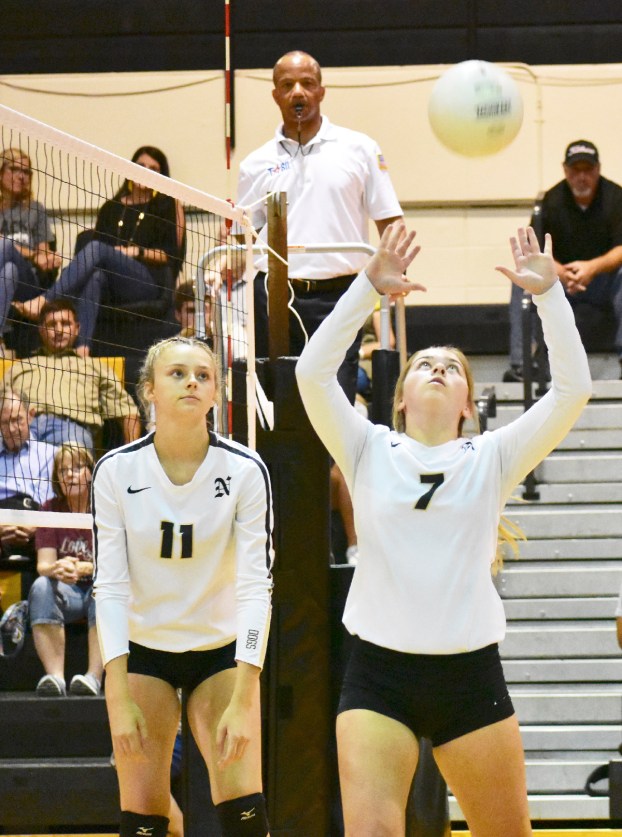 Kamren Savarino of Nederland sets up an attack with Mackenzie MacFarlane in the picture Friday in Nederland. (I.C. Murrell/The News) 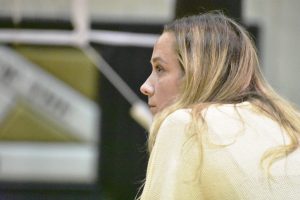 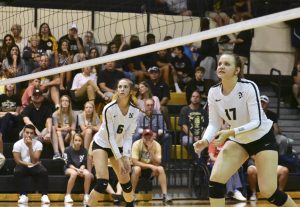 Karley McGill (6) and Hannah Hickey (17) of Nederland set up to receive a serve against Tarkington on Friday. (I.C. Murrell/The News) 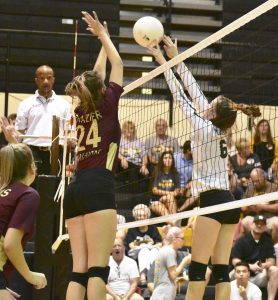 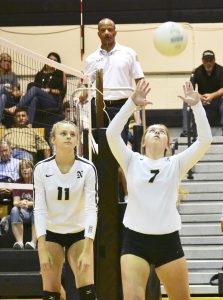 Kamren Savarino of Nederland sets up an attack with Mackenzie MacFarlane in the picture Friday in Nederland. (I.C. Murrell/The News)

Port Neches-Groves has had Goose Creek Memorial’s number all season.

Newby made 12 digs, Gil had nine, and Smith and Jones each dug six. Ariel Muller made three kills and blocked one, as Layla Stansbury, Bolyard and Gil each blocked one as well.

PNG, which was home Friday, will visit Huffman on Tuesday.

In Nederland, the Bulldogs (8-11) won the first set in pursuit of an eighth straight win, but the Longhorns had no plans to go 0-2 against Mid County on the week.

Tarkington rebounded from a 20-25 defeat to win the next three sets 25-19, 25-23, 25-22 despite Karley McGill’s 14 kills and two blocks. Hannah Hickey added seven kills and a block, Destyn Miguez made 16 digs and Jenna Jarrett totaled 26 assists for Nederland, which will host Liberty on Tuesday.

In Winnie, Memorial (13-5) was swept in its first volleyball match since winning a share of the consolation title in the Orangefield tournament last Saturday.

Memorial will host Hamshire-Fannett on Tuesday.

FOOTBALL: Turning up the tempo: Titans clicking against Bulldogs

NEDERLAND — Port Arthur Memorial scrimmaged for the only time this season after starting practice on Aug. 13, one week... read more