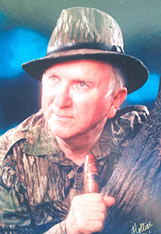 James “Cowboy” Fernandez, 86, of Groves passed away on Thursday, August 16, 2018 at Baptist Hospital in Beaumont.

He was born on December 12, 1931 to his parents, Manuel Fernandez and Josephine Martinez Fernandez in Port Arthur, Texas. James served in the United States Air Force. He retired from Gulf States Utilities with over 42 years of service. He was the founder of Sure Shot Game Calls, Inc., a game call manufacturing company in Groves. James served on the Groves City Council for a number of years. He was a member of Memorial Church of Christ in Port Arthur.

He was preceded in death by his wife, Iva Mae Fernandez and daughter, Diana Kaye Fernandez, his parents and his siblings.