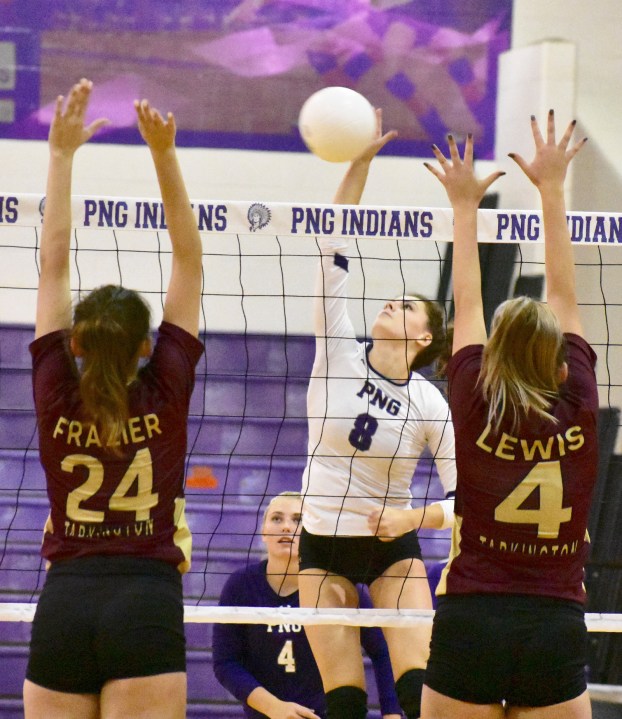 Kaitlyn Gil of PNG fires a kill against Taylor Frazier and Parker Lewis of Tarkington on Tuesday. (I.C. Murrell/The News)

VOLLEYBALL ROUNDUP: Streaking right along: PNG sweeps for No. 6; Nederland goes 5 for No. 7 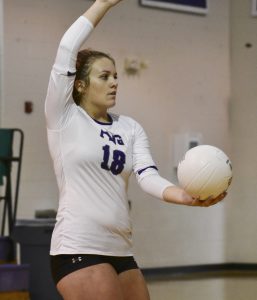 Harlee Barnwell of PNG winds up for a serve against Tarkington on Tuesday. (I.C. Murrell/The News) 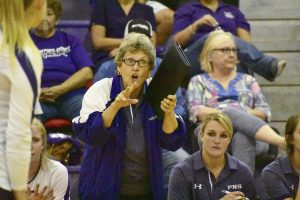 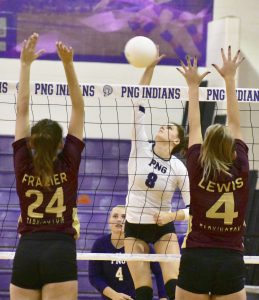 Kaitlyn Gil of PNG fires a kill against Taylor Frazier and Parker Lewis of Tarkington on Tuesday. (I.C. Murrell/The News)

PORT NECHES — Dominance and Port Neches-Groves often go together on the volleyball court.

Kaitlyn Gil and Liz Bolyard each recorded double-digit kills, leading PNG to its sixth straight win, 25-10, 25-18, 25-16 over Tarkington, on Tuesday.

The match was the eighth in the past six days for the Rock-A-Noos (15-2), who last lost in their second match of the Dickinson tournament to Clear Brook on Thursday. Gil led the way with 18 kills, and Bolyard had 11 for PNG. Bayja Newby struck six aces on 13 service points, Harlee Barnwell aced four times on 11 service points, and Gil (8 SPs) and Halley Smith (6 SPs) each made an ace.

Layla Stansbury added four kills and block for the Indians, who will take on Goose Creek Memorial for the fourth time this season. PNG has won all three matches.

Make it seven wins in a row for Nederland.

Jenna Jarrett had 29 assists, Hannah Hickey 11 kills and four blocks, and Karley McGill eight kills for Nederland, which will host Tarkington on Friday.