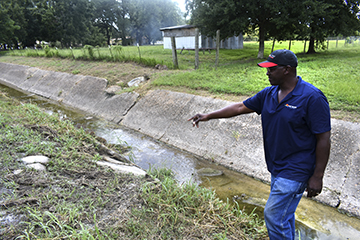 T. Brown, Port Neches wastewater treatment plant supervisor, points out an area where a discharge pipe will be filled in with a concrete mix to prevent leakage. Mary Meaux/The News

GROVES — The city of Port Neches is working to reinforce two long closed off discharge pipes at their wastewater plant in Groves but some residents still worry that sewage water will make it to Taylor Bayou.

Robert Munson noted the flow of water from the plant located at 6499 Georgia St. and into a concrete drainage ditch about a month ago. Munson believes this was sewage leaking from the facility — he said he was initially told the water he saw was just runoff water from recent rains.

The resident said he has seen items like feminine hygiene products and condoms from the area in question and has made several complaints to the Texas Commissions on Environmental Quality and has spoke with city staff as well.

A representative of TCEQ visited the facility on Monday, according to Taylor Shelton, director of public works for the city. He said they have done everything TCEQ has requested.

“TCEQ is aware,” Shelton said of the issues with the discharge pipes.

“This is over 20 plus years of concrete and the ground has shifted,” Brown said. “We are replacing and repairing what time and nature shifted.”

The wastewater treatment facility treats an average of 1.5 million gallons per day, he said.

Munson isn’t the only neighbor near the plant that has launched complaints. One couple on a nearby avenue — Terry and Kay Godwin — have made multiple complaints through the years to TCEQ for various issues including filter flies which are known to feed on organic matter.

Races heating up in Groves, PNGISD

Filing has ended for the November election and both the city of Groves and Port Neches-Groves Independent School District will... read more