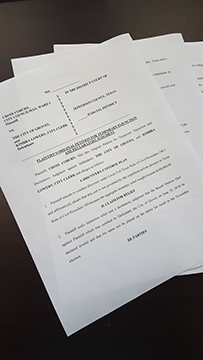 GROVES — Groves City Councilman Cross Coburn, who is the subject of a local recall election, has filed an injunction and is requesting a declaratory judgment in the 60th Judicial District Court.

Coburn believes he is the victim of a targeted attack by political rivals on social media. The recall effort came about after semi-nude and nude photos of Coburn were made public after he shared them with a person he met on the gay dating app Grindr. The photos were first sent to city hall then local media and questioned Coburn’s character as a councilman.

A petition was circulated and was approved to recall Coburn from office.

“We haven’t agreed with the petition or how it was handled,” Coburn said. “Me and my team didn’t believe it was right. There were numerous errors. I don’t think anything has compromised my integrity of office or status as a councilman.”

The filing was made Aug. 7.

Groves City Clerk, Kimbra Lowery, had sent the original petition, filed by community member Lane Howlett and circulated by Councilman Kyle Hollier, the wife of Mayor Brad Bailey, and the wife of Councilman Sidney Badon back to the petitioners for irregularities after it was filed and per city ordinance. While there was still a significant portion ruled inadmissible, the petitioning group’s second effort was ruled satisfactory to meet the signature burden by Lowery.

Councilman Coburn’s team has found some glaring mistakes on the City’s part, according to a press release from the East Castle Group, which is working with Coburn in his bid to keep his seat on council.

Coburn filed the Request for Temporary Injunction in order to prevent the recall question from appearing on the ballot in the November election and until such time as the trial court can convene a hearing on the merits of his challenge to the petition.

“We have filed a declaratory judgment based on the discovery of numerous improper signatures that should not have been verified by the City Clerk,” Coburn’s attorney, Jill Pierce, said in the press release.

Coburn’s camp is requesting a trial to hear the declaratory judgment request and both Lowery and Bailey have 20 days to file an answer. Both were served on Aug. 8.

There are so many problems with the original ordinance”, Jonathan Scott, Managing Director of New York based East Castle Group, who has been advising Coburn on election strategy, said. “I have been involved in petitioning and political efforts throughout the globe, and I have never seen an ordinance that allows the petitioner to have a bonus period to fix their improprieties. It makes the City a de facto partner in the recall effort… which, in this case, they seem to be anyway.”