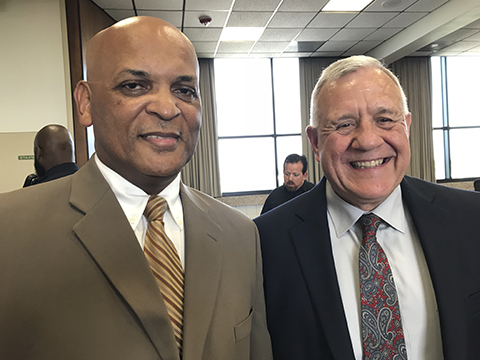 The announcement, which was on the City Council’s regular meeting agenda, was met with loud applause in the council chambers.

As chief, Duriso will return to the department where he was a patrolman, detective and sergeant from 1985 to 1998 under Chief John Tyler. He left the Port Arthur Police Department for the DEA position of special agent and while there rose to supervisory special agent. He has served more than 20 years with DEA.

Duriso holds associate and bachelor’s degrees in law enforcement from Lamar University and completed Department of Justice/FBI training at Quantico, Virginia, where he studied investigative techniques.

At Lamar, he completed an academic minor in sign language.

While at PAPD, Duriso patrolled the streets, investigated crimes including drug trafficking, supervised detectives, and served as an instructor at the Lamar University Police Academy.

For five years, while an officer, he was a substitute teacher in Beaumont public schools.

“His experience and background training pretty much speak for itself when looking at the needs of the department and the community and who’s best prepared at this point to address those issues,” Robinson told The News while revealing the hire.

The new chief will replace Acting Chief John Owens, who was appointed to the interim role May 22 following former Chief Patrick Melvin’s resignation on May 19. Owens did not seek the permanent position.

The other three finalists for chief included:

Alton Baise, who has more than 32 years experience in police work and is currently employed with the Jefferson County Sheriff’s Office as fugitive warrant officer. He was previously employed with PAPD.