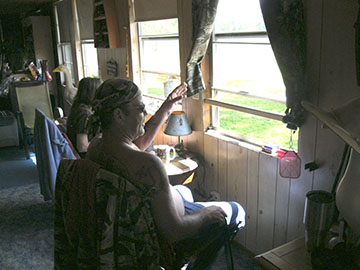 Jefferson deputies used this photo of the convicted man in his home./Courtesy photo

A Jefferson County man has been sentenced to a year in state jail for killing a neighborhood dog.

Wortham said Gosch, who lives west of the city limits off College Street, on Highway 90, was convicted July 18 for the May 13, 2017 shooting of a mixed breed dog that belonged to his neighbor.

Wortham said Gosch claimed that the dog was on his property and had acted aggressively toward him. Gosch said he returned to his house and, seated inside, opened a window and used his .22-caliber Marlon rifle with a scope to shoot the dog in the head from around 50 yards away.

“There is no such thing as self-defense from a domesticated animal,” Wortham said.

The dog’s owner told deputies that his pet had not threatened Gosch, but said Gosch, holding a rifle, threatened him as well.

The punishment for felony cruelty to an animal ranges from 180 days to two years in the state jail with a fine not to exceed $10,000. Wortham said Gosch must serve at least 80 percent of his sentence. He said Stevens sent him directly to jail.

Wortham said a convicted felon loses his right to a gun for five years after serving his sentence. But he said federal law prohibits a felon from ever getting his guns back.

“Judge Stevens held the defendant accountable and proved that this county will not tolerate cruelty to any person or animal,” Assistant Criminal District Attorney Michael Morgan said.

BEAUMONT — Beaumont Police are looking for two men who bullied their way inside a McDonald’s to rob them but... read more