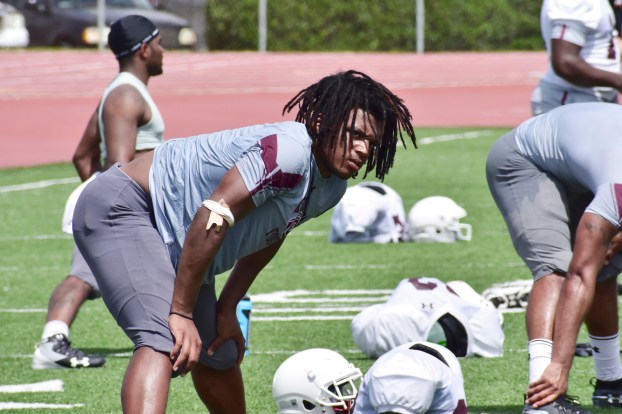 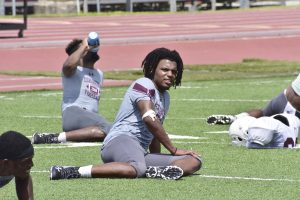 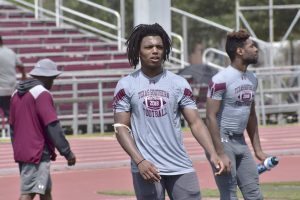 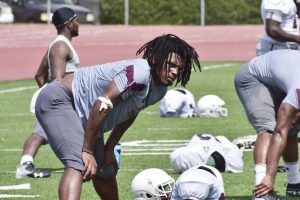 HOUSTON — From the time De’Andre Angelle was helping Memorial’s 4×200-meter relay team set a national record to his time as a Texas Southern wide receiver, his speed has stood out in the mind of his current position coach.

“They were the fastest team in America that year,” Dallas Blacklock said, recalling a feat from the 2017 UIL 5A track meet in Austin. “He held down that anchor leg, and we’re hoping he can continue to use that speed to be a threat for us in the deep and vertical passing game.”

The Titans’ 4×200-meter team set a national record of 1 minute, 23.52 seconds, and helped the entire program finish second in team standings for the second time in three years. The group included two recent signees to Division I football programs: Angelle and classmate Kary Vincent Jr., a two-time 200-meter state champion who is now a starting cornerback at LSU and the lead leg on LSU’s Southeastern Conference-champion 4×100-meter team.

“Starting with [track] coach [Darrell] Granger, it starts with competition every day in practice,” Angelle said. “Everybody wanted to beat everyone. To be on a relay, you’ve got to be one of the four fastest. Competition is the main thing. When we set that record, we didn’t know we were going to do that. We weren’t planning nothing; we just worked hard and kept striving for it.”

TITANS ON DIVISION I MAP

That’s not even the most former Titans head football coach Kenny Harrison has placed at one time.

“I think actually, somewhere around 2012-14, we had about 20 guys on a Division I roster at one time,” said Harrison, who left Memorial in February to become Humble Summer Creek’s coach. “That’s when we had Elandon Roberts, Matt Romar, Jhajuan Seals and other guys in college.”

Many of those athletes at that time had played on the most successful Titans football team to date, the 2011 then-5A Division II state runner-up team.

“I’d say the program that was put in place was designed to prepare kids for the next level,” Harrison said, asked how did he produce so much Division I talent. “The coaching staff I had back in 2011-12, that was our goal to have a college-ready program and we had kids ready to go to college. I feel good about what we had in place in Port Arthur.”

“He went and talked to the coach, and at the time, they had quite a few quarterbacks on scholarship,” Kenny Harrison said. “[Kadon] figured the best way to get on the field was at receiver.”

Kadon has not let Napier down, apparently. The former scout-team quarterback caught a 75-yard touchdown pass at the end of the spring game in April and was one of the recipients of the Cajuns’ Tyrell Fenroy Most Improved Freshman Award. Kenny said Kadon caught three passes in the game.

By the time Auburn kicks off against Washington on Sept. 1 in Atlanta, Martin will likely start in the backfield.

With 773 rushing yards and five touchdowns in his college career, the lights won’t be too bright for the 5-foot-10, 193-pound speedster. He’s rushed for more than 100 yards twice, going for 176 yards in the second half alone against Alabama A&M as a freshman and 136 yards last season against Georgia Southern.

Martin has been seen on social media video working out with NFL free agent Jamaal Charles, a 2005 Memorial graduate, and 2007 West Orange-Stark alumnus and current Seattle Seahawks free safety Earl Thomas in Austin, where Charles and Thomas played at the University of Texas. A big year could help Martin follow in their footsteps and turn professional after a junior season.

One way Martin can turn heads if he becomes the Tigers’ sixth straight 1,000-yard single-season rusher.

The Southeastern Conference has brought Martin and Vincent back together, if only for a rivalry. LSU edged then-No. 10 Auburn 27-23 last Oct. 13 in Baton Rouge. The two will meet again in Auburn on Sept. 15 in a CBS-televised game.

In New Orleans, Dauphine could be the feature back at Tulane, which is looking for its first bowl appearance since a 2013 loss to Louisiana in the New Orleans Bowl.

Dauphine redshirted his freshman season at Texas Tech and saw limited action before deciding to transfer at the end of the 2016 season.

He sat out 2017 as a result, but the 2014 6A 200-meter champion looks to post his best season while 2018 Memorial signee Keitha Jones acclimates to the linebacker position after quarterbacking the Titans to the 5A Division I Region III semifinal last December.

Angelle played in seven games last season and started in nearly each of those while sharing time with Malik Webb. Angelle finished the season with eight catches for 90 yards.

Now, the true sophomore hopes to move back in a starting role after sustaining a foot injury during spring drills.

“I basically injured my foot on a dig route (a short run then a turn toward the quarterback),” Angelle said. “My toenail had come off and all that. I was supposed to have surgery, but they just set me out because if I had surgery, I would’ve been out the whole year, so I just sat out just to recover it and be ready for the season.”

He’s slowly working his way back up the depth chart, Blacklock said, while he learns a new offensive system that recently hired coordinator Morris Watts has brought to head coach Mike Haywood’s Tigers.

“I think just being who De’Andre is and growing up where he’s grown up at allows him to be a fighter,” Blacklock said. “That’s one thing I love about him. He’s never going to quit. He’s going to fight until the end. He’s a tough, young man. He’s had to battle some adversity throughout his life. When you recruit a young man like that, you find out through the recruiting period how tough he is and how he’s had to overcome adversity, and those are the type of players you want.”

The Texas Southern Tigers have found another product of Memorial’s ever-growing Division I tree. Just as Martin and Vincent are poised to do in the SEC, Angelle looks to make some headlines in the Southwestern Athletic Conference.

“It’s a family thing,” Angelle said. “We always cheer for one another. With Corey, Kam, KJ, Kadon being on the D-I level, we just want everyone to be successful. If the NFL is the goal, we’re just going to make it to the NFL. In the meantime, you just get a degree and remain focused.”

Andrew Landry unleashed one of the best rounds of his PGA Tour career Friday to soar 68 places up the leaderboard... read more