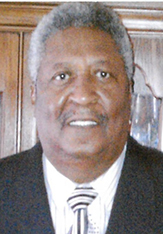 Walter Lewis Jones, 77, departed this life and entered into eternal rest on August 3, 2018.  He was born to the late Walter and Orelia Jones on September 18, 1940 in Port Arthur, Texas.  He met and married the “Love of his Life”, the late Marjorie Mae Jones on June 25, 1959.  He worked as a welder at Gulfport Shipbuilders until the company’s closing, as well as Bethlehem Steel.  He was a member of First Sixth Street Baptist Church.