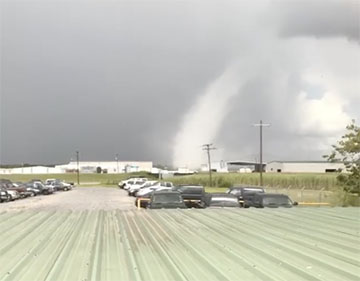 Keegan Guidry caught a video of this twister at Procter Street and Main Avenue in Port Arthur on Tuesday. Courtesy photo

Keegan Guidry was at work Tuesday near Procter Extension when she saw what appeared to be a tornado not far away.

The twister was seen along Procter Street and Main Avenue around 11:30 a.m. in Port Arthur. It didn’t last long but Guidry’s video of the unfolding weather event spread quickly on social media.

Roger Erickson with the National Weather Service in Lake Charles, Louisiana saw the video and said it is a “land spout,” which is a type of tornado that is generally weaker than tornadoes you would see in other, inland geographic areas.

Erickson said there were other similar sightings in Louisiana and that this is not unusual in the summertime, with its tropical air masses.