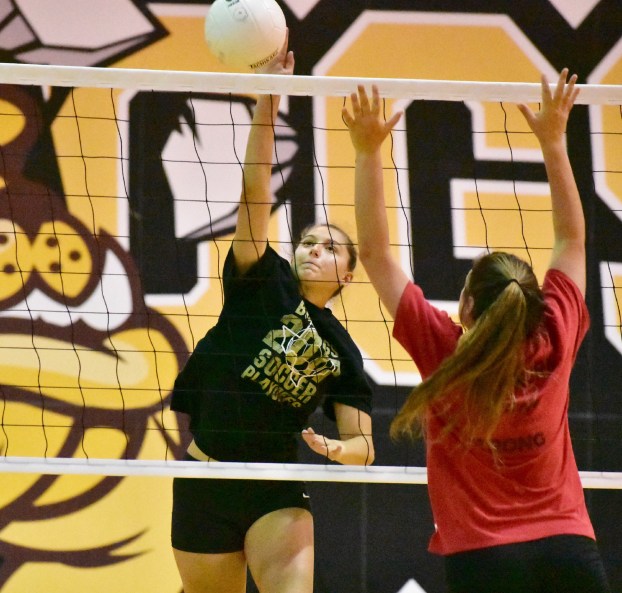 All varsity matches, unless otherwise noted, begin at 6:30 p.m.

NEDERLAND — Among the things Skylar Thomassie and the Nederland Bulldogs learned from then-first year head coach Allie Crommett during the fall of 2017, the Bulldog experience isn’t limited to the volleyball court.

“Everything that you do goes toward how you compete on the court,” Thomassie said. “Being on the court with the team, that’s like best feeling ever, being with people you are close with, not like strangers.”

“I think it makes us closer and helps us bond better because we’re all so close,” Sheppard said. “… We’ve been playing together since we were 13. It makes things easier.”

The four helped Nederland win a share of the District 22-5A soccer championship this past spring and are also the returning starters on Crommett’s volleyball team.

“I think all these sports translate into each other,” Crommett said. “Being a one-sport athlete, that’s great, but I think being a multi-sport athlete kind of helps you in all aspects. You’re able to read things better because you play multiple sports. It translates to all things.”

For example, Sheppard — who is also a track athlete — is a known offensive threat in both sports, while Miguez is defensive-minded in both — if she’s not creating offensive opportunities for others.

“I always look one step ahead, so that when the ball is coming over the net, I’m going to make a good pass so my teammate can score or make a good hit. So, I’m always going to be like, if I do this, my team can do that. I like to help my teammates a lot.”

Nederland finished fourth in 22-5A volleyball last fall and lost to Kingwood Park in the 5A bi-district round. But with nine returnees to the varsity, the Bulldogs’ goal is to establish themselves as a power in a remodeled District 21-5A. The Bulldogs have moved with Memorial, Port Neches-Groves and Vidor into the league and will also take on Barbers Hill, Cleveland and Dayton.

“I’m looking forward to the diversity of the teams,” Plumley said. “It’s going to be a tough year, but we are a tough team and we can handle anything that comes our path.”

Nederland won’t put any more pressure on itself to win in the new district, knowing how successful teams like PNG and Barbers Hill have been, Crommett said.

“… We already know that those programs are successful. But now that we have so many returners back, we know we can compete with them,” she said.