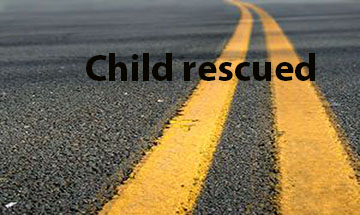 A toddler who wandered away from his family was found walking near the highway on Texas 73 early Friday morning.

Joey Villemez was on his way to get a part for his lawnmower and a bite to eat when the car in front of him suddenly swerved and in those brief seconds he saw why — a toddler was at the edge of the roadway not far from Nutty Jerry’s near Winnie.

“My heart dropped. I have a little grandbaby that just started walking,” Villemez said of the encounter that happened around 7:30 a.m. “I slammed on my brakes. Stopped in the road.”

Villemez said he was worried he would frighten the little boy but that was not the case — the boy ran and jumped into his arms. The child was wearing a diaper and shirt, no shoes and was carrying a purple towel, he said.

By this time another couple en route to Houston stopped as well. Soon there were law enforcement officers on scene. Some brought the boy some cookies and juice and Villemez said he sat with the child and fed him. Another officer brought some toys along and the group went door to door in search of the child’s family.

“It just broke my heart,” he said of the situation.

“I’m praying for the kid. God put me there,” Villemez said. “I don’t want any recognition. It’s the officers.”

Two people were transported to a burn unit by helicopter after a house fire in the 1100 block of Trinity... read more