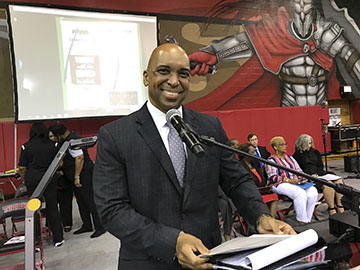 The Texas Education Agency is working to help school districts and charter districts directly affected by Hurricane and Tropical Storm Harvey as it pertains to the state’s accountability system.

Districts will receive a rating of A, B, C, D or F beginning in August and under the Hurricane Harvey provision announced by TEA in June, the 2018 accountability ratings will be generated for eligible districts using available data, according to a news release from TEA.

Districts that meet at least one of the Harvey criteria and receive a B, C, D, or F rating, will be labeled “not rated.”

There are 83 school districts in the state eligible including Port Arthur ISD, Nederland ISD and Port Neches-Groves ISD.

There are also 26 eligible charter districts including Bob Hope School in Port Arthur and Tekoa Academy of Accelerated Studies in Orange and Port Arthur.

Mark Porterie, superintendent for PAISD is thankful for the news.

“We appreciate the TEA recognizing that the devastation brought on by Hurricane Harvey had a direct effect on the academic success of our students,” Porterie said. “Due to the hurricane our school district had a 14-day delay and many of our employees and students were displaced from their workplace and home.  I am proud of the support and dedication that was shown from by our staff, students, parents and the overall community.

“With the support given we were able to work with our students and, at the end, they were able to be successful. We see some academic areas where our students exceeded our expectations and we also see areas that we need to address, but, overall, and considering what our community endured for the 2017-2018 school year, I could not be more proud of our district.”

PAISD facilities took a hard hit with Harvey. Staff and students of Staff Sergeant Lucian Adams Elementary School were forced to move to two different locations for the entire year and the administration building was temporarily relocated to Lamar State College Port Arthur.

“Our contractors have been excellent and Adams Elementary School and the administration building staff are now, both, operating at their original locations and we are ready to conduct business as usual,” he said.

In PNGISD, all campuses except Ridgewood and Woodcrest Elementary received the exemption, according to information from the district.

Harvey did not affect the start of the school year in Nederland and had very minimal impact on facilities.

The criteria used by TEA is based on data reported by the districts and charter schools during the past school year.

“The data reported indicates the number of displaced students and teachers, as well as the impact on local school facilities and instructional time,” according to a press release from TEA.