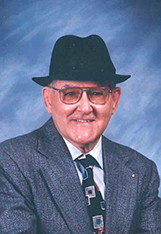 Leonard Joseph Gaspard, 90, of Port Arthur passed away on Monday, July 31, 2018 at his residence.

Leonard was born on April 11, 1928 in Abbeville, Louisiana to parents Anite (Stelly) and Alcide Gaspard. Leonard was a Christian and family man; he also was a member of Calvary Baptist Church in Port Acres. He retired from Gulf States Utilities after 44 years of employment, as a consumer service supervisor. Leonard enjoyed gardening, was an avid Dallas Cowboys fan and in his younger years teaching his son, Ned, to hunt and fish. Leonard was a loving person and who will be missed dearly.

He was preceded in death by his parents, his brother, Ligia Gaspard, his sister, Ollie Broussard.

A visitation will be held on Thursday, August 2, 20418 from 5:00 PM until 8:00 PM at Clayton Thompson Funeral Home. A 2:00 PM funeral service will be held on Friday, August 3, 2018 at the funeral home, with Rev. Jeff Bell officiating. Burial will follow at Greenlawn Memorial Park in Groves.