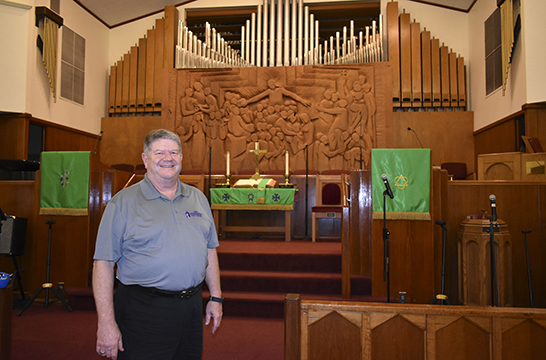 Metthys went into the ministry as a second career after working more than 30 years in retail.

“I’ve always been associated with the church and helped with a lot of positions,” Matthys said from his office. “Finally, God decided to use me for something more.”

The pastor believes every Christian is called to ministry and he received his own calling at Lakeview Conference Center outside Palestine.

“I knew then there was not much doubt I would go into the ordained ministry,” he said.

In the Methodist faith, there are several paths, ministerial-wise.

“You have to have a master’s (degree) of divinity to be ordained as an elder,” he said, adding this required 82 college credit hours over the undergraduate work. Seven more hours and he would have enough hours to have a doctorate.

Seated at his desk in the church offices, Matthys is flanked by large windows with a view of the courtyard. Behind his desk is a signed poster by He Qi, a Chinese religious artist.

A framed photo taken around 1982 shows a large house fire with several firefighters silhouetted against the orange flames. Matthys proudly explained that the Pasadena VFD is the largest all volunteer fire department in the U.S. and he served in the department for eight years. Matthys is one of the firefighters in the photo, he said.

When asked about hobbies, his eyes drifted toward another photo, one on a top shelf, of him on a bicycle.

Matthys cycled for about 15 years and only slowed down when he entered the seminary, he said. In the past he took part in the MS150 — actually he did this one eight times, cycling from Austin to Houston as a fundraiser for muscular dystrophy.

Another cycling event had him riding for two days, 80 miles each day, for a charity. He has plans for a November ride for children’s ministry through the church, he added.

Plans at the PN church

First UMC Port Neches will begin a new journey called Vibrant Church Initiative, which is a new way of doing church, so to speak.

“Not only is this about getting new folks here but for folks to have a deeper relationship with God,” he said.

Part of the equation is Disciple Bible Study, a 34-week in-depth course.

“People will come out with a better understanding of the Bible and how it fits in with their lives,” he said.

Matthys brings with him his wife, Mary Ann. The couple has two children and one granddaughter.

Go to school, win a car comes to PNG

For the past 16 years students at Nederland High School have known that good attendance means a shot at winning... read more