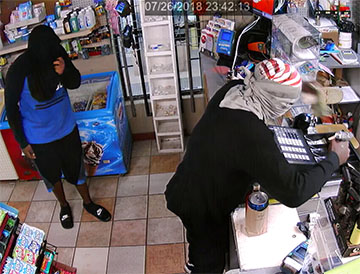 The Jefferson County Sheriff's Office is seeking help in identifying three suspects in the armed robbery of a store.

The robbery happened around 11:45 p.m. Wednesday, July 25 at the Kidd Grocery Store located at 3618 Kidd Road, Cheek, which is southwest of Beaumont city limits. 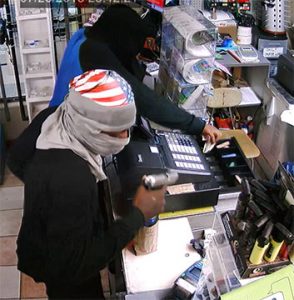 Surveillance photo of suspects in the armed robbery of a Cheek area store.

Surveillance video shows that three black males approached the store with shirts covering their faces, according to a press release from the JSCO. Two males went into the store and robbed it at gunpoint while the third male stayed at the door. One of the suspects pointed a silver semi-automatic handgun at the clerk and demanded money. Both of the inside suspects stole cash from the register. There are several photo’s that show partial faces. 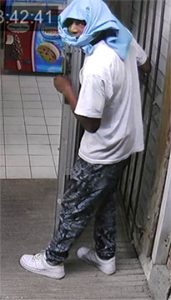 A suspect in the armed robbery of a Cheek area store.

If you have information about this crime or think that you may recognize any of the suspects, call Crime Stoppers at 409-833-TIPS (8477). You can also make an anonymous tip to Crime Stoppers by downloading the P3 Tips app on your smartphone.

Big turn toward country; Don Meehan, others want to rescue a traditional sound

Don Meehan sang pop at the Jefferson Theater in Beaumont in the ‘40s, was a general’s choice to replace crooner... read more