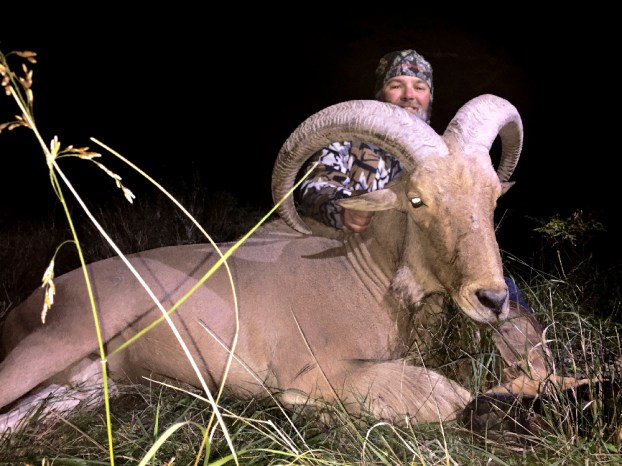 Here is a picture of my Aoudad. I was lucky and he wasn't! (Brian Johnson/Special to The News)

BRIAN JOHNSON ON OUTDOORS: Build your own bucket list 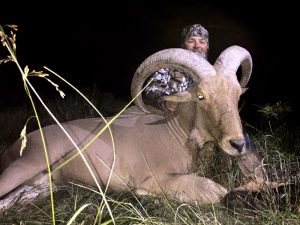 Here is a picture of my Aoudad. I was lucky and he wasn’t! (Brian Johnson/Special to The News) 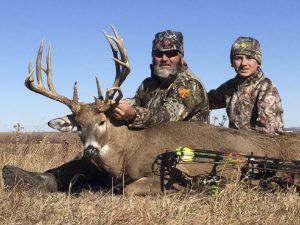 My son Noah was with me when I killed the whitetail I had always dreamed of. (Brian Johnson/Special to The News)

Years ago I watched “The Bucket List” starring Morgan Freeman and Jack Nicholson.

For those not familiar with the story, both men are dying and they comprise a list of final things they would like to do before they died. This is basically the list before they “kick the bucket,” thus the name of the movie. The rest of the movie shows them checking the items off of the list, one by one.

I encourage each of you to create your own bucket list, but don’t wait until you are terminally ill to do so. I personally have several bucket lists that I am working on.

One is for golf, one for basic travel, and the other is for hunting/fishing. Once you accomplish an item you can check it off and move on to the next.

Below is my bowhunting bucket list that I created several years ago. I have already checked a few items, but there are plenty more to keep me busy:

1. Free range whitetail self guided over 150 inches
As a whitetail hunter, this was my primary bucket list item. I felt like no matter what I killed, if I didn’t kill a trophy whitetail, my list would be incomplete. To me the whitetail is the ultimate trophy. I actually checked this one off of my list a few years ago as I lucked into a giant whitetail that scored well over 200 inches. There is no doubt in my mind that I will probably never even see one bigger as long as I live.

2. Trophy male Aoudad
I’m not sure why I wanted one of these so bad, but I did. Maybe it is because they look similar to the big horn sheep that I will never be able to afford to hunt. Either way, I have always thought they were a great archery trophy, and I actually killed one just a few hours into my first ever Aoudad hunt. Once again, luck was in my corner.

3. Free range trophy Axis buck
Many years ago I killed a nice Axis on a high-fenced ranch and thought I would love the challenge of hunting one free range. The Texas Hill Country has a fairly dense population, so I thought I might be able to make this happen.

Axis deer are very majestic and truly beautiful animals. They are very wary and super unpredictable, so that put the Axis high on my list. After a season on a deer lease in Kendall County, I had the opportunity to check this animal off of my list. However, they are so tasty, I wouldn’t mind shooting one every year for the rest of my life!

4. Eastern Gobbler
Once East Texas established a turkey season, I decided that I had to take one with my bow. I must confess that this is way harder than shooting a Rio under a corn feeder in the Hill Country. In fact it took several years, many close calls, and the expert calling of a good friend to finally close the deal. I returned the favor and called him in an even bigger bird the next week.

5. Wart hog
As many of you know, I absolutely love shooting hogs with my bow. When it come to hogs, a wart hog over a water hole in Africa is the stuff dreams are made of. I long for the opportunity.

6. Rocky Mountain Elk
Every bowhunter has dreamed of a giant elk.

As I watch the outdoor television shows, I see exactly how it is done. Run up and down mountains all day chasing and calling while paying attention to the wind in hopes of a giant getting close.

The problem is, I’m not the slightest bit interested in climbing mountains. I’m a Gulf Coast flatlander. I’m out of shape, and I am afraid I would quickly run out of oxygen. That doesn’t keep me from dreaming. I want to see one bugle and smell the aroma of a rut crazed bull as I draw back my bow. Maybe I’ll just find a nice water hole and wait. He has to drink eventually. I’ll make him come to me.

7. Giant Forrest Hog
These are the largest of all of the hogs weighing in at over 600 pounds. They are super-cool looking and are generally hunted in the jungles of Africa. The idea of traipsing through the bushes with my bow and arrow, in a land that is full of animals that can kill a human, while in pursuit of a 600-pound boar with giant tushes is both terrifying and exciting. It may sound crazy, but I’d like to try.

If you noticed, I started with animals that are available in Texas and are somewhat affordable to hunt. Now my progress is slowing down due to logistics and finances. However I still have the rest of my life to look work at it.

I want to encourage you to build a list of your own and to start sooner rather than later. God has created a magnificent world full of adventures and places for us to explore. Write your list and begin the journey ASAP.
•
Brian Johnson, originally of Port Neches, is pastor of the Outdoorsman’s Church in Winnie, owner of DuckDogTrainer.com and outdoors writer for The News.